I wrote a Getting Started Guide!

I kinda felt I was a bit too forward with my thoughts in my last post, so I’ve been ruminating over everyone’s replies.

That happens… nothing to be worried about.

The next step here would be seeing how we could convert your content to MD format and structure it to fit into our doc system. In theory it should just work… but we can also make to the tool if we run into any issues.

This won’t get forgotten, right? That would be a real shame

I just remembered another thing that came up recently was the Stack Overflow Documentation system. You can read more about that here:

And here is the current MonoGame documentation topic page:

MrGrak this is great! I wish I could have had it back then when I started my adventure with MG. Even after 2 years of coding in MG I find some of this RescueDog code usefull and this is nice. Aweseome job!

First I’ll say anything I don’t mention I consider excellent. Quite often did I think “wait, that’s not right” when you pointed out that exact issue on the next page

I did have a few niggles, just as I’m free to mention them you’re free to ignore them.

Special mentions for the Optimization and Localization pages. Too often do these get left out. Kudos for the points where you clarify an optimal solution, with the beginnings of how to go about implementing it, and clarifying you’re using a simple solution along with reasons it’s not optimal.

You’ve left me wanting more which is the mark of a good beginner’s tutorial.

For anyone interested in this guide, you can see the HTML content without cloning/downloading the repo by visiting the following link http://rawgit.com/MrGrak/Monogame-Getting-Started/master/index.html

Why isn’t there a github.io page created for it?

For more info on how to set it up look at: https://pages.github.com/

Recently, I started developing UWP apps on Xbox One, so I’ll have some additional articles to add in the future. Right now, I’m planning out some timing tests that I’m going to use to judge the Xbox one’s available resources (since UWP apps have limited access to the system). These tests will mostly be timing how long it takes to draw various sized textures and strings, so I can get an idea of what the limits are. I’m assuming Xbox One uses the DirectX API, right?

I also plan on adding some UI based articles that explain how I approach creating custom, animated UI for my games. I’ll also add an article discussing handling multiple gamepad input, for local multiplayer.

I’d really like if someone could throw together a Lidgren Networking tutorial. I’d be happy to handle arranging all the information and pictures to meet the design standards - I just don’t know much about networking. If any Mac friends want to make a tutorial about using Xamarin or their experiences with Monogame on Mac, I’d be happy to integrate those tutorials as well.

In the distant future, I’d like to somehow get this Getting Started Guide onto a web server, so people can just visit a page to view it. It’s kind of inconvenient to have it on the github, but it works for now. My dream is to see the guide added to the monogame.net > documentation > getting started section, which is still suspiciously barren - but I know you guys got your way of doing things and I respect that.

I’ll keep it updated for each release, and add to it bit by bit overtime.
Good job on the 3.6 release! I’m looking forward to Switch support!
Happy to be a small part of the community.

*I also updated the Wikipedia page to reflect the 3.6 release.

Take a look at GitHub pages @MrGrak. @harry-cpp mentioned that before. Free & easy hosting and quick to set up. I still think it would be great to get your guide into the official docs.

My dream is to see the guide added to the monogame.net > documentation > getting started section, which is still suspiciously barren - but I know you guys got your way of doing things and I respect that.

We would love to see that happen. Like I said before the next step would be converting your content to MD format and structure it to fit into our doc system.

Humm lets look at it like its a game.

We have this at the top of the page…

Where does a Tutorial / Guide belong in the above ?

You have 3 seconds to pick.

is it news ?
is it a download ?
is it class or variable or method documentation ?
Is it a forum post to be lost in time ?
Community might as well just be named forums.
Is it about?
People rarely look at about.

No its none of these.

What xna had was this the education catalog.
http://xbox.create.msdn.com/en-US/education/catalog/

Which is exactly were something like this would go if approved.

Now play the game again what are we missing at the top right of the browser ?

I think that’s pretty much what we need to pull in all these scattered tutorials and guides. Maybe a subsection within for specific how to examples. I think they would need to be dated and tagged with some extra info. So you could filter searches. As well as submitted and approved before being added but you could have more then one of the same. You might even just let them get added and have a like dislike button on each so as to filter by ratings.

From that link the Getting Started guide can be seen the way I intended, just using a browser.
Plus, it stays current with the github repo, so I don’t have to ftp the guide to a server.

@willmotil I see your solution, and agree that there’s room somewhere for this guide.
However, I’d just like the Monogame.net > Documentation > Getting Started page to link to the rawgit link above. Imagine that when you look at this page, there’s a link in the right hand section that says something like “An unofficial Getting Started Guide is available here: http://rawgit.com/MrGrak/Monogame-Getting-Started/master/index.html”. 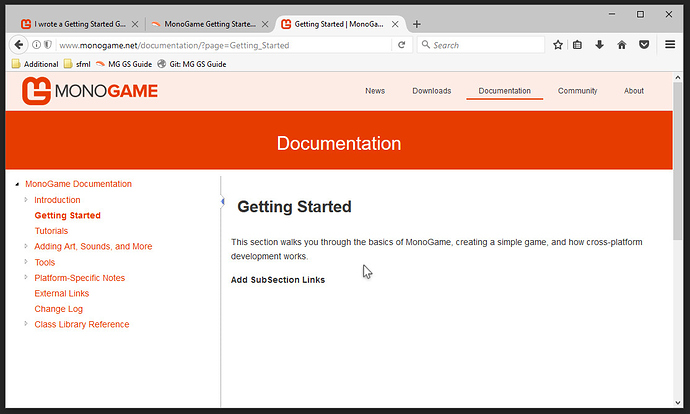 It could replace the todo text “Add SubSection Links”, which makes the page seem like it’s never been updated. I don’t think an entire education section needs to be created, as the Tutorials section covers that pretty well - http://www.monogame.net/documentation/?page=Tutorials

@Tom What do you think about just adding a link to the Guide from the Getting Started page? It seems like the easiest solution, without having to convert the guide into the MD format. I’d really like to keep using the HTML approach to presenting the information, because it keeps things very organized, it’s visually engaging, and very easy to update and maintain. I’m not trying to be a pain here, I just think there’s merit to the approach I’ve taken.

While not fully understanding the MD approach [And it appears to be a lot of not needed work] the HTML bare bones approach makes sense as if you are using relative path links, this means the whole site can be downloaded and viewed practically anywhere, you could even look into creating a CHM binary document for those inclined… I am sure the MD approach has some benefits, however it feels a bit archaic so to say… I could be wrong and as stated I am not fully aware of the approach and just wanted to chime in my opinion on the use of Raw HTML…

I am keen to create my own documentation at some point too which will have a dedicated platform of its own as that is how I like to do these, and mine will be primarily focussed on the UWP aspect, the more [Tutorials] the merrier I say

@Tom What do you think about just adding a link to the Guide from the Getting Started page?

We do not need a mirror site that mimics parts of our site with manually written HTML.

I guess we’re at an impasse. We have no plans to switch to HTML as the source format for docs.

Everything you just described is the same if not better using Markdown.

I suggest take one or two pages of your docs and actually try to use our existing system.

How does MarkDown work? can you link to a guide?

How does MarkDown work? can you link to a guide?

There is a basic example here: https://en.wikipedia.org/wiki/Markdown#Example

There is an interactive tutorial here: http://www.markdowntutorial.com

Markdown is used by most of the major developer sites including GitHub, BitBucket, and Stack Overflow. Even reddit uses Markdown.

Oh… also what you’re typing here on this forum is Markdown… you just didn’t know it.

Forgot all about it…

I think it is possible to write a Html to MD converter using the HTML tags, no?

Look what I found: 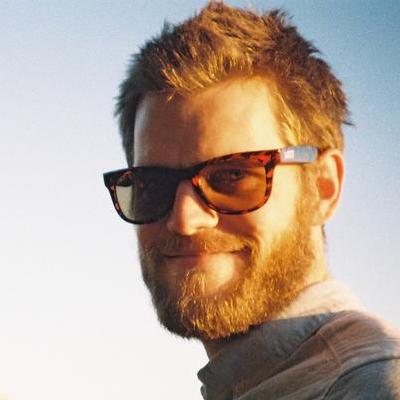 🛏 An HTML to Markdown converter written in JavaScript - domchristie/turndown

Sorry, my brain has been on pause for the past two weeks, having a difficult time remembering some things… going through a tough patch, hopefully get through it and have a great game to show off what MonoGame can do! and enable me to financially support the project too!

FYI. Came across a new system called DocFx by Microsoft that we can maybe evaluate as a replacement to our current SharpDoc system. Still uses MD like it should… just changes the tools and workflow a bit maybe:

I recently came across a new-ish documentation generation system called DocFX: http://dotnet.github.io/docfx/ We should consider if we should switch over to DocFX over...

@MrGrak I saw your post on threading and just wanted to bump this since you’re active in the forum.

Would you let me translate this tutorial to markdown and integrate it into the official docs? We still don’t have a good official tutorial for a full game and this one would be perfect.

Yes please. Sorry I have been absent for awhile, I’m back now.