For me, when I’m working with a git repository I’m looking to clone it, build it, and run it.

Except you still need Monogame, which has to be installed. : - )

Making it run on nuget is a whole heap of problems. First of all, you can’t install templates via Nuget, which is very important. Dunno about you, but I don’t want to manually set up Game1, GameController, resource loading and resources themselves. Second, Pipeline Tool also requires a reference, which can’t be really wired up to nuget, since it’s not a project. Third, Nopipeline also required .targets entry in .csproj, and it has to run before Content Pipeline.
If you know how to solve those issues – cool, let me know, but as I see it, making it an installer is the simpliest way. Monofoxe isn’t just a library which you can optionally install – it’s a whole engine on top of which you build a game. Spending two seconds to install the thing isn’t that difficult, I don’t think you hop onto a new machine every day.

Tried to run it myself in a secured folder and it gave me a different exception.
Open mgcb config in text editor, find /reference: entry and replace all “/” for all “” in the path. Then rename .npl comfig to something other than Content, so it doesn’t run and mess up your mgcb. Just make sure to run it at least once, so that .npl actually generate references and stuff.

Also kinda forgot to mention #begin Content.mgcb. It should… work? It’s treated as a regular resource.

Pinned down the source of issues. I’ve been running it on the MG 3.7.1 and you – on dev build. I’ll try to investigate what the issue is, but can’t promise anything. I am not supporting dev build which breaks new stuff every day. : - D

…and nope, it’s not something that can be easily fixed. I have some ideas on how that could be fixed, but I just recommend downgrading to 3.7.1, sorry. If I’ll start chasing the dev build support, I’ll go insane. I will fix the (x86) paths in a couple of days, but yeah, that’s pretty much it. If the same issue will persist in stable 3.8 release, I’ll get on it.

@gn.fur
Alright, I got some success with MonoGame 3.7.1!
Please check out the comments below about additional feedback and questions you had asked me earlier.

Sorry I wasn’t clear on this in my prior post but I actually did try this. It didn’t fix the issue when I was using a dev build.

Create projects in a regular folder, not on desktop. I’ve seen Windows Defender blocking write access to files in Desktop already, and this may very well be the case.

I do projects off my Desktop as a starting point pretty regularly, so I didn’t think this is the problem. After installing MonoGame 3.7.1 SDK on my machine, I was able to build it with the project on my desktop. So the path wasn’t the issue (more on those results below). But hey, success with the build!

Try creating a regular MG project on Deskto and opening its .mgcb.

I tried uninstalling everything and then using your installer to install Monofoxe, MonoGame, Visual Studio 2019 Templates, and selected ‘Remove old versions.’
It doesn’t appear the MonoGame part of the install worked. I was expecting to see the same result as a MonoGame 3.7.1 install, but it doesn’t look like anything we added. What does checking this option do?

I noticed that when uninstalling Monofoxe, NoPipeline remained installed (the folder with all the files remained). I had to know to find it and run its uninstall.exe manually to clean it up.

In regards to building MonoGame without installing it and just using NuGet - I’ve been able to make that work.
I have MonoGame projects, building through a DevOps cloud, with cloud build agents that don’t have MonoGame SDK installed on them working. This was done by swapping out all referenced with Nuget references to MonoGame.
This also build locally even after I uninstall MonoGame SDK completely.
Here is a UWP csproj for this (NuGet Packages). Notice I even pull in MonoGame.Extended references here.

The only other thing I needed to do was remove the .target references in the csproj and it builds just fine.
Might be something worth considering for your templates.

So all that said, installing 3.7.1 locally with the SDK, then using your installer, then using the template and building it worked. Onward!

I noticed that when uninstalling Monofoxe, NoPipeline remained installed (the folder with all the files remained). I had to know to find it and run its uninstall.exe manually to clean it up.

Yep, this is already fixed in dev releases. In 1.0.1.1 Nopipeline was a separate thing with a separate installer. Now it’s embedded into Monofoxe installtion.

It doesn’t appear the MonoGame part of the install worked. I was expecting to see the same result as a MonoGame 3.7.1 install, but it doesn’t look like anything we added. What does checking this option do?

It just runs default Monogame installer. If you were expecting to see Monogame templates installed in VS2019 – MG doesn’t support it yet. I mean, I could repack the MG installer with fixes for that, but I don’t see much reason for it.

The only other thing I needed to do was remove the .target references in the csproj and it builds just fine.Might be something worth considering for your templates.

Except then resource building will not work. : - )

Ok, with the very latest dev build I can confirm NoPipeline cleans up after itself, and the MonoGame installer does kick off and install properly and allows for seperate uninstallation. All good there.

Except then resource building will not work. : - )

Are you sure? Check out this NuGet package:

You’ll notice it contains a MonoGame.Content.Builder.targets
It also contains MGCB.exe under the build\MGCB\build along with all the files that typically get installed with the local installer.

I have cloud builds going on, right now, that use this. I don’t check in any xnb files to my source control because I don’t need to - the cloud build kicks off MGCB.exe and builds everything.

@craftworkgames provided a good tutorial that, with dotnet new, you can generate a template, build, and run it. You can absolutely take this initial template, add a .png and reference it in the .mgcb file and it will absolutely build it and it will be loadable in the program. I just did this again, without MonoGame installed locally, to verify the whole thing.
The only issue you have is that you don’t have the nice MonoGame Pipeline UI Tool installed, but my point is you don’t need to run the local installer to build the assets and use them.
Here is the tutorial link: http://www.monogameextended.net/posts/getting-started-with-monogame-extended

I’m looking forward to digging into the Monofoxe solutions and appreciate the back and forth on all of this. Forces me to look much deeper into MSBuild and the flow around these tools!

Hmm, maybe it would even work…
…but I don’t really want to completely rewrite all of my installation system. : - )
Not now, at least.

Sounds like an upside. Pipeline Tool UI is complete garbage and should not exist – I even wrote Nopipeline just to not use it.

At one point we didn’t have a pipeline tool at all, so to say i like it well enough. I just think the whole content processor importer reader writer is confusing even having written a couple for practice i still feel very murky when i think about it.

The one thing i think i am really missing is a way to just reference a folder or folders that has all my content with sub folders with the xnbs that are all only pulled into a project in place at publishing time when you flip a switch, Such that all projects can be set to reference the same place and sub folders for all tests and content then separated at will into a project only when the user deems that it is time.

To say it another way if i link to a content item, i do not know of a way to later copy that linked item without removing and re-adding it. This is tedious and i tend to not link.

This has caused me to have a lot of duplicate items across many many projects as i feel other options also have drawbacks.

Tested Monofoxe on Macos – turns out, it works out of the box, even though I’ve not intended for it. 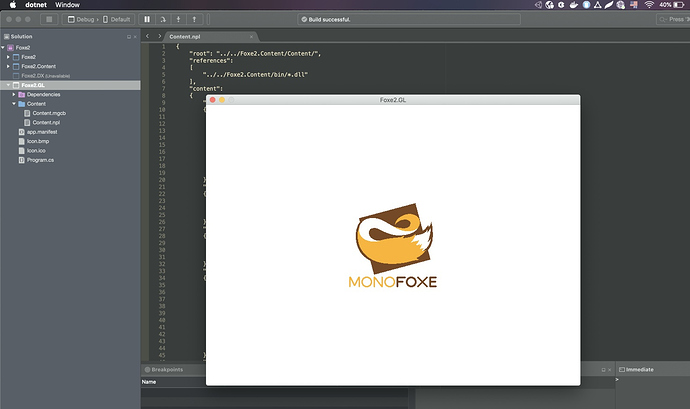