HI folks. I’m having a blonde moment over vector reflections, I’ve battled with this before and stumbled, but this time I have to get it working. I’m sure I’m missing something simple, but it’s eluding me.

I need to get the reflected vector of a moving object against a static. The angle of attack could be anything from 0 to 360’

So I have: A and B which are the two objects with position and velocity vectors, and this bit of testing code. In the following case B is stationary.

This reflects vertically perfectly, but doesn’t reflect horizontally. I don’t understand how else I’m meant to present the Normal.

Which bit of the equation am I missing?

PS, I will get around to answering all your helpful replies soon, life has been complicated!

A. Position - B. Position gives a direction, not a normal.
I’ve don’t see how a normal can be created from 2 points. It is usually perpendicular to a plane given at least a 3 point.
Normalize gives the vector’s coordinates between 0 and 1, it does not give a normal:
http://www.fundza.com/vectors/normalize/

In your case the normal is the direction, thus always reflecting on the opposite of the direction between the 2 points

I’ve don’t see how a normal can be created from 2 points.

No that parts right the surface plane is derived from the normal given to the reflect function and a normal in graphics refers to a surface normal of a plane polygon or vertice.
This also somewhat derives from optics.

In geometric optics, the angle of incidence is the angle between a ray incident on a surface and the line perpendicular to the surface at the point of incidence, called the normal. The ray can be formed by any wave: optical, acoustic, microwave, X-ray and so on. In the figure below, the line representing a ray makes an angle θ with the normal (dotted line). The angle of incidence at which light is first totally internally reflected is known as the critical angle. The angle of reflection and angl...

Provided that what he wants is a reflection vector and not a intercept formula.

if you have two vectors ObjectPosition and TargetPosition then…
The target - position gives the direction to the target. .
Normalizing that changes the 3 element vector into a unit length vector by pythagoras…

You can see one of these familiar properties of a unit length normal by multiplying each element against itself, to find the Acos of x y or z described previous, which yields the ratio of the angle in each dimension to the current coordinate system for example .707, .707, 0 becomes .5 .5 in 2d that’s a diagonal line from 0,0, or a 45 degree angle if you sent that to Math.Atan2 * ToDegrees. (I digress)

The reflect vector is also intended to be a unit length vector.

The surface normal is used by the function to calculate the surface or the Plane that is used to find the reflection vector in all three dimensions x y z however in the function above this concept is woven into the math itself.

However
keep in mind that a ray may reflect off a surface and continue in its general direction or back towards the original rays emission source. 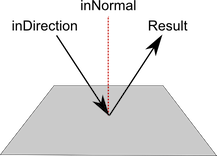 This is a important thing to keep in mind because at times. One may wish to dot the result vector by the original directional vector that was used to find out if the ray is bouncing away or back towards the source of emmision. If the dot product yeild’s a positive value it is bouncing away if negative its bounce back (if i remember that right). Before you start fliping signs of x or y make sure that the result isn’t already correct even for 2d. In the image of the light the normal and the result we see that the sign of results Y element is not the same sign as the Lights y element sign but the x signs are both positive.

Typically when you insert the vectors to the reflect method you can get different results for special circumstances, by just negating one of the vectors passed in to the reflect function the order of passing and which vector you invert matters as well.

Here is a snippet from my shader i wrote the other day that uses the reflect function.

You can see the red as it reflects off the edges from behind as i switch on the lighting visuallization.

yes it does. How does this even work when i have defined it as a normal in the vertex declaration ? your vertexdeclaration goes for vs as it efine VertexShaderInputC but change semantic for ps so it ok.

Sure, I was just trying to explain that his vector and his normal the way it is calculated are co-linear and why he does not achieve what he was expecting

So my code is correct as the normal of the collision point is 90’ to plane of collision.

In my actual code, for some reason I had decided B-A gave me the vector I wanted, when what I needed was A-B.

Thanks for all the info, this will be invaluable at some point.