A* based pathfinding using triangular navigation meshes in C#

Currently I’m developing an oldschool 2D graphic adventure game in C# and for this I wrote an A* based pathfinding implementation on triangular navigation meshes. Both the engine’s as well as the game’s source code are available at GitHub.I wanted to share both pathfinding code and some theoretical explanation of it to make some things easier for future game devs.

In typical 2D adventure games, the player can move a character in a room by clicking with the mouse on a given position. The room is most likely drawn in a one point or two point perspective and there can be non walkable obstacles within the room which can obstruct the character when he is moving behind it. 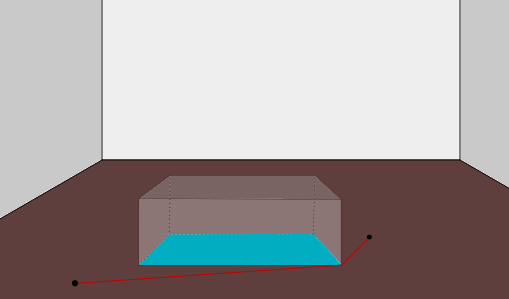 Besides doing pathfinding within the walkable areas of a room, we also should to be able to associate arbitrary data with any walkable point in the room like scaling of the character or, e.g., a color which would be used for shading.

StarFinder uses a triangular navigation mesh to define the walkable areas. A triangle is defined by three points (“vertices”) and is always walkable. It can be reduced to a straight line if two vertices are identical. The triangles must not overlap with each other. A real life navigation mesh is depicted below:

Note that some distance to any obstacles is kept since the game character’s sprite also has some width to consider. Otherwise it would look like the character was standing in the wall.

This navigation mesh can be created programatically by giving a list of vertices and then defining which vertices belong to a triangle, or it can be created in a dedicated tool, saved to and later read from a file.

Upon initialisation on runtime, StarFinder once processes a given navigation mesh by

The obstructing edges are the triangle edges that are not shared by two (or more) triangles, as drawn in dark red below: 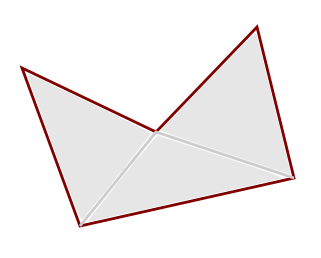 The triangle edges drawn in light gray are not obstructing because they are shared by two adjacent triangles.

The node collection keeps track of any non redundant triangle vertex and also the information which node can be reached from which node without passing any obstructing edge (“link”) using a line of sight check. Using the example above, the nodes would contain the following vertices and links between them: 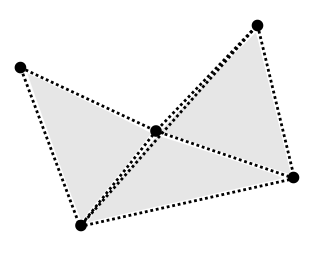 Note that there is an additional link between the top right and the bottom left vertex because the line of sight is not obstructed by any of the obstructing edges.

In order to find out which node is linked to which other node, a line of sight check with respect to the obstructing edges is performed.

First, it is checked if the middle point between the given nodes is contained in the navigation mesh. If not, the result must be false.

We do the very first check to handle the situation in the following image: there clearly shouldn’t be a link between the two nodes pictured in red. However, there isn’t any obstructing edge (dark red) crossing the line of sight between them. But the middle point in between them isn’t contained in the mesh. 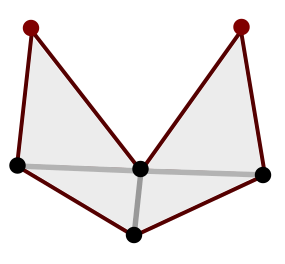 Having both node collection (also containing the possible links between the nodes) and the obstructing edges in place, we can do actual path finding on the nodes using A* algorithm. If the start and end positions are not contained in the mesh, we use the closest points inside the mesh.

If there is no obstructing edge between the start and end point or both points lie in the same triangle, we can skip the search and return back a straight line as a result. Otherwise the search is executed.

Since the search’s start and end position usually do not coincide with one of the static nodes / triangle vertices already in the node collection, we insert them temporarily to the collection and calculate links between them and all other nodes using the line of sight check:

In the example above the two red dots represent the start and end position and the dashed lines the links to the other nodes. The static links between the previously existing nodes are not pictured for clarity. The red continuous line in the second picture is the shortest path determined by the A* algorithm.

Here is the path finding playground application in action:

In order to handle the scaling of the game character, or, e.g. the shading with respect to the current position in a triangle on the navigation mesh, it is possible to associate arbitrary data to the triangle vertices. 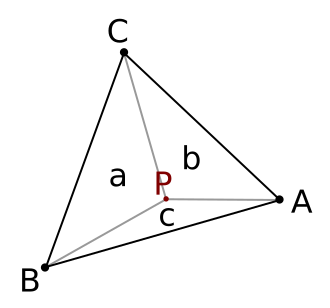 In the picture above there is a triangle given by the vertices A, B and C which all have some scaling value s(A), s(B) and s(C) defined. If the character is now placed at position P inside the triangle, which scaling value should be applied?

A requirement for this to work is that there is multiplication with a scalar and addition defined on the vertex data.

This concludes the theory part - please find the actual implementation in C# here.

This is really cool

This is amazing. I have found your source code a really helpful guide in creating my own pathing code and I just wanted to say thank you!