I tried to install MonoGame with Visual Studio 2010, but when I got to the installer, the option to install the VS 2010 Templates was greyed out.

Here are some details on what exactly I’m using:

I’m a complete newbie to MonoGame, so sorry if I’m missing something. I checked the system requirements (http://www.monogame.net/documentation/?page=System_Requirements), but they were empty, so I just kind of assumed that what I’m using right now works.

Thank you for your time.

Yeah, I don’t know why it’s grayed out or if they stopped supporting it. I think I’ve heard it has something to do with administrative rights.

Visual Studio C# 2010 Express with XNA 4.0 Refresh should do the trick until you can upgrade to MonoGame.

You could also try Xamarin Studio or MonoDevelop

Alright then, guess I’ll just wait for Monogame 3.6 and try again. Thanks!

Are you trying to install the “stable” version and not the develop one (3.6 develop branch) ?

Not sure about Vista being supported. MS has stopped its support. 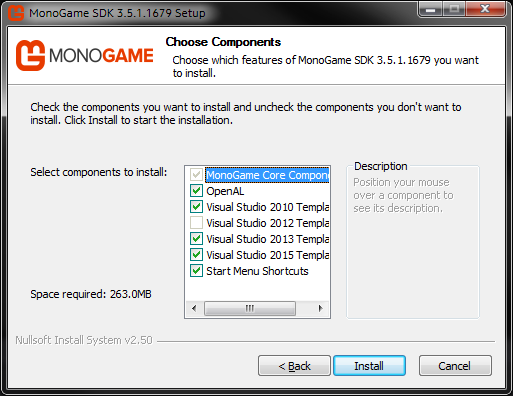 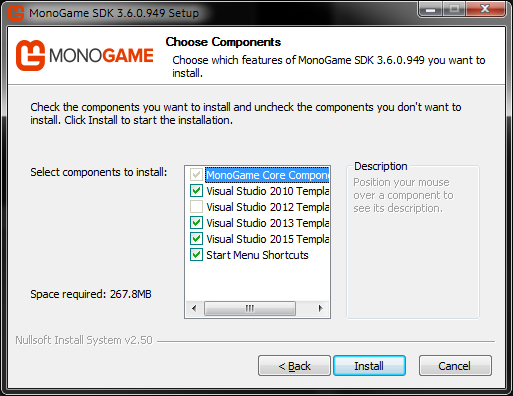 So first off, I just thought I’d quickly mention support for Windows Vista: Vista is still under the Extended Support phase, and so is Windows 7, so it doesn’t really matter whether or not it’s still support by Microsoft, it matters if Monogame supports it in the first place. Just thought I’d clear that up.

Anyways, sorry about that, just some nerd rage

Monogame should work on my PC. My graphics card and my OS seems to meet all the requirements that actually managed to get filled out in the documentation, so I decided to do some experimenting. And btw, I forgot to mention in my original post, I tried installing 3.5.1.1679.

I went to an older version of Monogame (3.4) and tried to install that version. And all of a sudden: 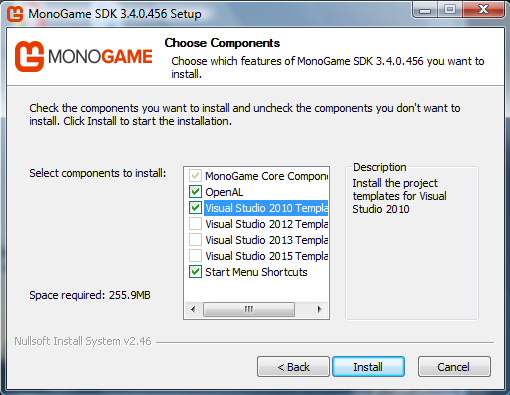 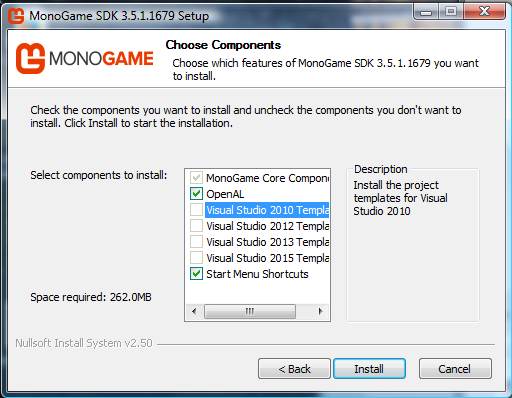 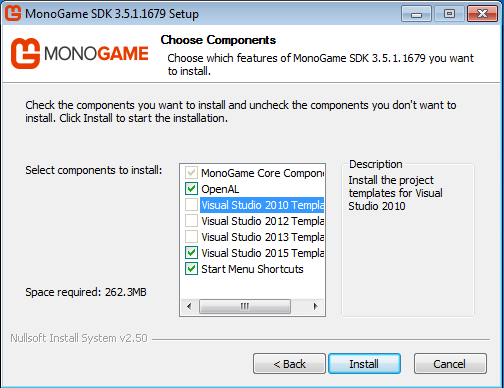 So… from this I would just conclude this thread by saying “oh I guess 3.5 only supports VS 2015”, but then YOUR screenshots completely throw that out the window, so… I don’t even know what to do now.

Speaking of things that just happened… I realized that there’s a hard disk in this old computer that my family is recycling, so I’ll probably just end up installing Windows 10 and VS 2015 on that disk. So I guess it isn’t really imperative that I find a solution for this issue, but it’d still be cool to just figure out what’s going on. Maybe we could finally update that blank system requirements page

So yeah. I don’t know that to do about this. I think I’ll just wait for the final 3.6 release, or until I can install that new hard drive onto my system for VS 2015 on Windows 10.

Actually, let me ask you these questions:

What version of Visual Studio 2010 are you installing Monogame with? I’m using Visual C# Express, so maybe there’s some weird restriction with that version?

Also, do you have UAC disabled or something? Because I think that can affect the way Windows handles permissions, which would tie in perfectly to what IcelYlaN said earlier about “administrative rights”.

The templates not showing up during install seems to be a quirk of Monogame 3.5 and affects all versions of Visual Studio. You will need to install Monogame then place the templates in the correct folder manually. Check out this thread:

Can you have a read through this other thread and see if you have the registry key and where your ProjectTemplates folder is? It references VS2013, but it should be similar for VS2015.

The templates are found in the dropbox link. Unzip the download then put the entire folder here:

This should get Monogame project templates working.

All of this said, I’m not entirely sure if 2010 is supported (despite what is listed on the downloads page). I can load up and work on a Monogame project just fine, but if I ever close and reopen the project in Visual Studio, I get an error message that “this version of Visual Studio is not supported.” I’m curious if you get the same message or if there is a workaround.

Hey, I did everything you said to do, and it works! Thank you so much for the answer!

PJSim - did you have any luck getting a project to build this way?

Setting a project to target .net 4.0 makes visual studio 2010 happy but seems to prevent a Monogame project from building. Is there a way to configure Monogame to work with a project targeting 4.0?