I am new to Monogame and decided to install it with Visual Studio Community 2017. I have downloaded and installed Monogame along with its VS2017 template(shown on Monogame installation screen). I then decided to install VS2017, I followed some guide online and selected Universal Windows and .NET Desktop. It originally stated I had to download about 14GB worth of files but for some reason only 3GB was shown on the installation screen and after this 3GB, it simply finished. I assumed it was done but couldnt find the templates after launching VS, showing that it didnt install properly or something.

I then closed it, opened up the VS installer app again and reticked the .NET and Windows tabs and it stated I had more files to download and so I did. This time it was another 2GB (forgot the number but it was definitely smaller than the size it was supposed to download), but afterwards it allowed me to open up the default template (Game1.cs) in VS.

I then decided to hit run on the file, but at the same time I realised some keywords/variables were underlined in red and as expected, the program gave me errors: no suitable method found to override. I was then considering that there had to be something wrong with the VS installation process because everytime I returned and reticked a box, it would state 0kb (close as the only button) and if I unticked and reticked again, it would say I needed to download another 9GB but when I press okay, it shows only 800MB is being downloaded.

I am truly confused as to how VS 2017’s modification system works as well as why my MonoGame default file wont run. Another weird thing is that sometimes the values on the required space is sometimes a negative number, does this mean I will gain space back or does it mean I need more space.

Sorry for the hastle

Can you post some screenshots or specific error messages? It’s hard to diagnose the VS problems without knowing exactly what’s going on.

It sounds like you managed to successfully set up a MonoGame project but it doesn’t recognize the types involved; is this correct? If so, add a reference to the MonoGame.Framework DLL (found in C:\Program Files (x86)\MonoGame\v3.0\Assemblies$YourPlatformHere).

I was messing around with my Visual Studio Modifications and not sure what happened but it seems that I cannot even find the Visual C# section when I press new -> project. Now I can’t even open any files. All I did was try to continue installing files for .NET modifications and it said -2GB as the size required, I am legit so confused why it stopped working after installing it, Im guessing that VS deleted my modifications.

First off, is there a distinct way of checking what exact modifications you have already installed. I find the UI for the installer app so confusing and I have no clue what anything means such as the negative numbers in the “total space required” section and why the numbers fluctuate so randomly.

Next, could you tell me the exact modifications I need, and for each one, are there any distinct individual components that are crucial and ones that I do not need (I am planning to make a game for Windows 10 computers).

Right now, my plan is to dedicate an entire day to downloading all the modifications in one go because I think that the entire thing was super confusing and something must have gone wrong in installations and I want to have a fresh new downloading session.

Make sure the .NET desktop development and UWP workloads are checked. 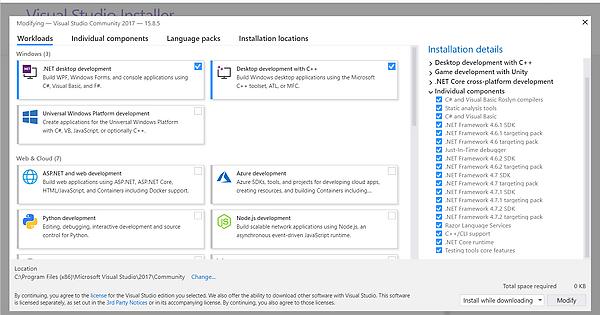 Go to the Individual Components tab of the VS Installer. That lists all the individual components you have and can install; make sure the .NET framework versions you want to target are installed: 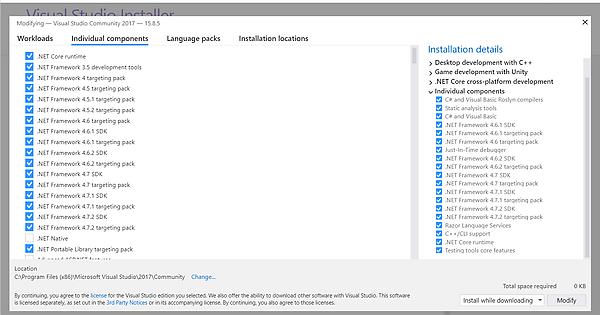 Then make sure the Windows 10 SDK is installed: 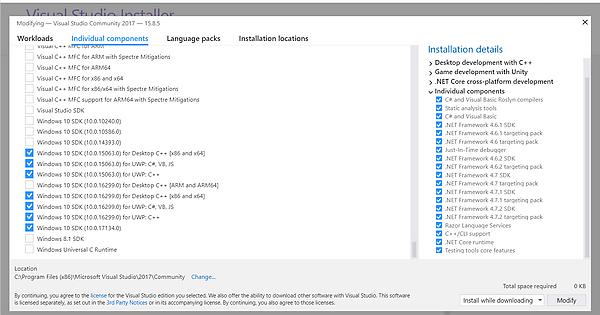 I hope that clears things up!

Thank you for the clarification. I have downloaded all the items from your screenshot and it looks like it is finally working. Hopefully no other errors arise in the future, but thank you so much for the help.