As far as I can tell no one else in the world is having this problem. I already asked this on the discord and on reddit and people don’t have any idea… But I’ll throw it into the void and see if anything jumps out at the experts here.

So here’s the deal, every time I build (using Visual Studio’s CTRL+SHIFT+B or F5) with zero code changes, one of two things happens:

A few weeks ago the “normal” behavior used to be that I’d start up my computer after a cold boot and the first build would need to rebuild Content (weird, right?) but then subsequent builds wouldn’t (except for random one-off times where it would?) this didn’t really get in my way so much so I didn’t care. But about a week ago it started happening every. single. build and it really sucks!

Some things that might make my environment special that could (maybe??) be the cause:

Some other things I’ve learned:

Diagram of my project topology 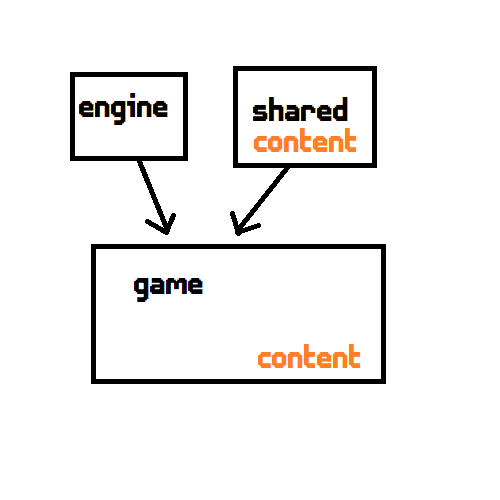 This has been the biggest motivation killer for me. I miss my 2 second builds and I really don’t want to need to do build finaggling to just get the basic functionality that’s supposed to already come out of the box.

Remember when there was an option to copy files if newer or something like that, in the editor? I am reminded of that…

So your current problem would persist even on a NEW and unrelated project? -That eliminates your code as the problem…
All I can think of then is settings somewhere global that spans all your projects, ie your editor or some other tool. Maybe even the framework or extensions for all I know, if you are using some experimental or undercooked version.

So your current problem would persist even on a NEW and unrelated project? -That eliminates your code as the problem…

Yes and no. All of my projects use a git submodule containing the engine csproj and the shared project (and then they’re setup like the diagram I have above). So it still could be something about that configuration. I’ll try to verify that and maybe isolate some steps to reproduce.

All I can think of then is settings somewhere global that spans all your projects, ie your editor or some other tool.

Good point. I’m getting the same bad behavior when I use dotnet build in the directory with the sln, so it’s not tied to any particular editor. Might still be some other tool.

This project should theoretically repro (and it does in my local directory where it was created) but when I clone it down it stops reproing. I did with with another project and it fixed it for a little while but then after a few days it started happening again. Which is super weird!

The way I worked around this the first time was creating a fresh clone of my project from GitHub and working off of that instead. It seems that if it’s a freshly cloned copy of the project it doesn’t have the bug. Within a few days though it started to do it again, implying something changes over time that isn’t tracked by git. The only way I know how to reliably repro this is to try to get work done in the project until you hit it again (which isn’t helpful for you-- I’ll see if I can find a better one).

One would think that if a freshly copied clone works but a more stale repo doesn’t, then a git clean would get me back into a happy state. Let’s investigate that:

I ran git clean -dfXn in my main project that’s been having this issue to see what git isn’t tracking and I see:

I ran git clean -dfX (same command minus the -n) in the main repo (not the submodule). I built once (using dotnet build so no editor involved) to get the first round of content and the second build skipped over all the ogg files (hooray!!). But then it went and rebuilt the files in the shared project (which live in the submodule and weren’t cleaned). No problem, I thought, I’ll just go into the submodule and git clean again. I did that, rebuilt and… I’m back where I started.

I can’t even reproduce the success I had earlier. Now if I clean the main repo it just rebuilds everything.

So now we have this weird contradictory behavior where a fresh clone won’t reproduce the bug but a git cleaned old repo will still reproduce it. I have no idea what to make of that.

Don’t mean to ignore, but I have no ideas. It’s above my pay-grade. I work within the normal framework, and use locally stored files, with no versions. so good luck.

I’m not expecting anyone to have an answer for me at this point. I’m just documenting for future people.

So the problem is either with Windows or something about my particular editor setup.

My normal development flow uses VS2019 (for development) and VS Code (running in my second monitor to handle git merges, etc). I noticed that the bug seems to be somewhat correlated to when VS Code is open (even though VS Code isn’t doing the building). I also have another insight I turned off the VS Code C# plugin and it seems to have gone away. My current hypothesis is the VS Code C# plugin was doing some building in the background and kept putting the content folder in a weird state.

Or there’s just something weird about my exact machine configuration. That’s also possible.