Hello everyone. first of I need to make my own modal class. Load Modals from the pipeline is not an option within my games as then need to be loaded / generated in realtime.

So Iv been trying to workout a few things about how to do things.

So far I have This.

I also think that I will have to calculate the normal for all the rendervertexs each draw.

Now this seems like a hell of a lot of processing to be done on the CPU and its got me worried that my approce is completely wrong. Using Vector3.Transfarm 100s in not 1000s of times each draw seems that it will kill my game.

So my question is I’m I approcing this wrong, Is there anyway to offload this to the GPU I.e send all the Vertexs to GPU with a matrix and get it calculated on GPU?

If you create your own models if your loading them from file at run-time then you have created them at some point. You might as well generate the normals for the model and save / load them too.

In The below image i did what you are describing, This was only for the purpose of saving loading them to a text file aka testing. This is really slow all the vertices are being resent to the gpu each time i altered something, which sounds like what your doing, but you would never do that in a game.
This was a terrain creating initial test i was rewriting dave f rogers old nurbs code from his site coded in c for c# i never really got to far into it though or finished.
the c nurbs site can be found here 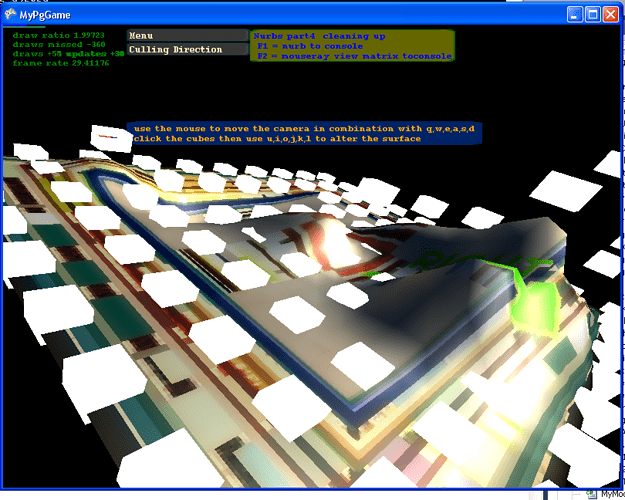 that’s cool. I had a feeling that there would be a better way of doing it.
I do have a question though.

How do I apply a matrix to my verts?

I have a gamecamera that already has matrix applied to the world, so how do I also apply a matrix to the vertex array?

You should set your matrix to your effect, or to the basic effect in monogame. that is passed to the gpu and it acts on it.
for example
i have a cube that is fully generated in code with the normals in the vertex format. I would just call draw on it, then send in the parameters like you would with a draw or drawstring but inis case i pass in matrices instead of text or a source rectangle or set the rotation parameter ect…

were i previously set the vertice data to the buffer just one time.
then beffect is loaded with info the effect passes tell the gpu how and were to draw the vertices.

the vertex format could be simply vertexpositionnormal or it could use something like so provided i was using a custom shader / effect that i wrote to do more stuff with the matrixes values or data in the format.

Thanks everyone I managed to get it all working.