yea, I know. “Not another Tower Defense Game”

anyway. Short backstory: I was forced to redesign the underlying rendering engine of another game I am working on and for that purpose I put some test projects up. It happens that for another prototype I needed some sort of very big heaxgonal grid with regions and such, so when I made this and played with all the functions, I actually ended up with something entertaining so I made a game out of it:

Behold! DeHexTD (hopefully generic enough to not get any trademark infringements) 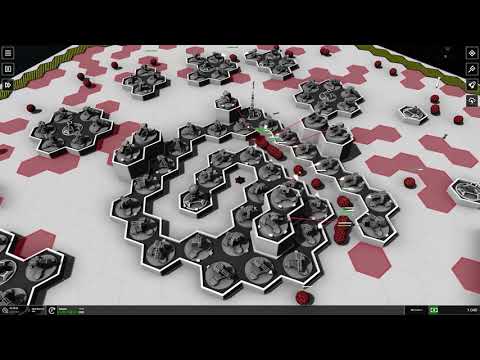 The ultimate goal is basically to prevent the enemies (red, rolling balls with no soul) to reach the middle of the playfield. To do so you can place different towers (they mainly have differing ranges) which will shoot on those balls and hopefully kill them before they reach the middle.

They come in waves and will be deployed on random positions at the border of the playfield. Every 10th (actually every 9th) wave, the level will increase. That means the playfield will GROW, which leads to more enemies being deployed every wave and also, enemies having more health.

So, when you fail to prevent an enemy from reaching the middle - you’re still in the game. But that enemy will now transform into a wastly violent beam, targeting a random field (destroying any tower built there) and making the field unusable for you.

Once 50% of the playfield is occupied by blocked (unusable) fields - you lost.

So what you think about it, how you like the trailer? Would be eager for feedback and feel free if you have any questions

If you feel like it, you can also wishlist/follow: DeHexTD on Steam

5 Likes
My Take on an Infinite Voxel Engine