-Edit- apparently not my name, a build after any changes will cause virustotal to throw a positive.

Steps to reproduce this error:
1 create a new Monogame windows project
2 change something under [Assembly Information]: e.g change Title, Description, Company, Product and Copyright to “Zweiz”
3 build and scan the file on VirusTotal.com, debug or compile doesn’t matter
4 Exe will report as a positive on ClamAV or Qihoo360 and marked as virus infected on google drive and mails

Anyone else facing this issue? Or is it my computer getting infected somewhat?

I’ve just found I’m having the exact same issue on a game I’m working on (Kynseed on itch.io). Getting the same error on 2 different pcs and creating a blank windows monogame project similarly fails for Qihoo360. Is this a known issue? Did you manage to get it resolved zweiz?

I can’t see any other comments on this or other mentions on the forum so am a bit scared it might be a local issue, might have to do a completely fresh PC install just to try and be sure…

I’ve sent an email to the address mentioned on http://www.360totalsecurity.com/en/help/ but given it looks to be an issue for any monogame exe I create I’m not sure if it’ll solve my problems…

Would really appreciate any assistance! Thanks.

No problem with my files. Add you folders to the exclusions list of the antivirus

Thanks for the reply. The problem is, I’m not the one getting the issue (windows defender and the vast majority of other antivirus software seems to accept that the file is ok). Virustotal.com allows sending of an exe for scanning, it is this that seems to be flagging false positive for a basic plain monogame windows project. Would you or anyone else be willing to try a test and do the same locally? I’m really just looking for confirmation that the issue is with the qihoo360 software and not with my PC or the setup of my projects so I can avoid issues in the future.

Hum… Why do you(/who else ?) send the file to virustotal.com ? I’ve it by sending my app’s exe and it says my app may be a virus too… whereas avast, kasperky, windowsdef says it’s ok.
I won’t bother with this antivirus (which I did know of before you mentioned it).
Remote antivirus like this are not the safer option as it can be a phising site, or anything else. And one can provide a customized report with whatever he wants inside. 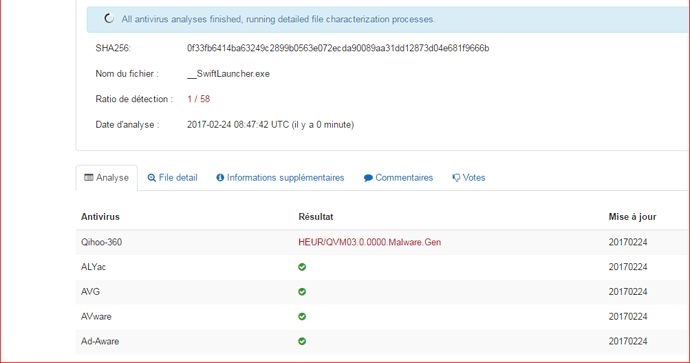 Thanks for testing, really appreciate it! And yea I agree it isn’t an ideal way to test or determine an app’s state, in this case at least the website company is a subsidiary of google so hopefully can be trusted to be reliable with its results. I will be careful in the future with other claims of problems… just it being my first venture into publically making a game available am looking to make sure nothing goes wrong!

Qihoo is a chinese app if I remember. Maybe they put their heuristics too high (I guess from HEUR/qvm…)
All the biggest AV say it is safe so…

no worries for your users (at least the non chinese ones