Ghost Leg Shooter is an in development, quick reaction puzzle game based on an old lottery system that is popular in Asian culture. 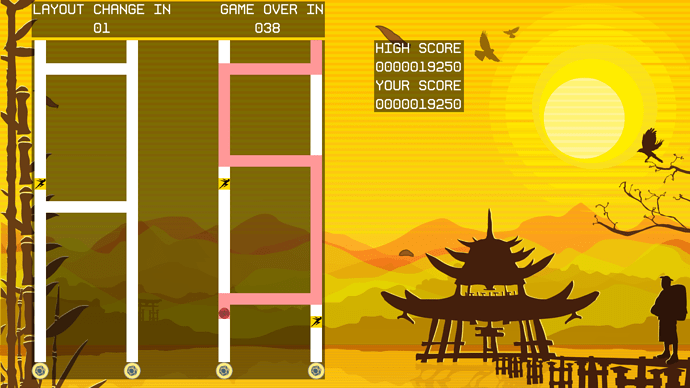 You launch shooters down one of four paths and try to collect points, bonuses and power-ups. Shooters move straight down to the bottom but will always cross a leg (aka ladder step, aka a horizontal line) when it passes one.

In Score Attack mode, the game board will continually shift and become more complicated with more legs. Collect as many gems as you can in 90 seconds. There are also speed power-ups that will give faster shots.

The game is currently in a prototype state. Score Attack is the only mode enabled right now. Nothing is really balanced and there’s many things I would like to add, even to this mode (more power-ups, power-downs, obstacles, etc . . .). The game’s content was thrown together from CC sources and it’s kind of outside my field to say how acceptable it looks and sounds at this phase, I’m more of an under the hood guy. The important thing right now was just getting the mechanics to work correctly, which I think they do.

I would like to come back to this and replace the graphics, make everything more animated, complete other modes, balance and tweaks and all that, I just don’t have the means to do all of this myself or hire an artist at the moment. This game is actually gameplay stripped out of a much larger game I’ve been working on and can’t continue without building some kind of team of people with the art skills I lack. As basic as this game is, there’s pathfinding, pseudo-scripting, level-editing, visual novel style cut-scene system, heavy mod support and a hook for physics all crammed in there but not being demonstrated. This game was the most stripped down thing I could accomplish and brought out by a desire to get something, anything actually out there for someone other than myself to see. I know the menu work is pretty sloppy, that was low priority and the final thing I threw together before releasing, I’d like to redo all that too.

You can get the game off its official page on itch.io for pay what you want (take it for free please, the pay option is basically a donation). Only a window version is compiled so far. I’ll look into doing a linux/mac version at some time, I only recently ported everything from XNA to Monogame so I’m a bit behind on the benefits of MG. Check it out and tell me anything you’re thinking.

I’ve updated the game, changed the rules up quite a bit. Looking to move on mostly, either to something new or something bigger to build around this (any collaboration ideas, let me know). Could still use feedback.