Made in XNA originally. Should work with MonoGame, when MeshBuilder class is implemented for the content pipeline.

maybe you should make a thread with all your xna things, would be more impressive Oo.

There is an open (stale) pull request for implementing MeshBuilder. https://github.com/MonoGame/MonoGame/pull/4078
I’ll see if I can finish that when I have the time

Different threads allow for project specific discussion, which I preferred.

The effect comes from a bunch of small point lights, which fly around (and through) the hellknight

I couldn’t resist, I think I might have it finished. I should be studying though

Thank you, it is not that urgent, since I have very limited time for my MonoGame projects at the moment (working in another city right now and commuting (right word for travel between home and work?) leaves me with less time under the week). But looking forward to do more stuff with MonoGame

What’s the PR no? Will help with testing.

Did you see the link posted by @Jjagg in this thread? I’m not familiar with the GitHub process, so I don’t know if “stale” means the PR is not “available” any more, so to say.

Stale generally means it’s not been updated in a while.

*Edit, found it. Seems @Jjagg created a new PR to continue the work under #5408 (https://github.com/MonoGame/MonoGame/pull/5408)

You can try it if you want @SimonDarksideJ. I tried XNA’s GeneratedGeometry sample, but it’s not rendering anything. I think the problem is not with the MeshBuilder though. Anyway, the PR is a better place to discuss it than here

For anyone interested in MeshBuilder: I’m pretty confident that MeshBuilder is correctly implemented in PR #5408. I got XNA’s generated geometry example running at least. So anyone with a cool project like the one at the start of this thread, get excited! 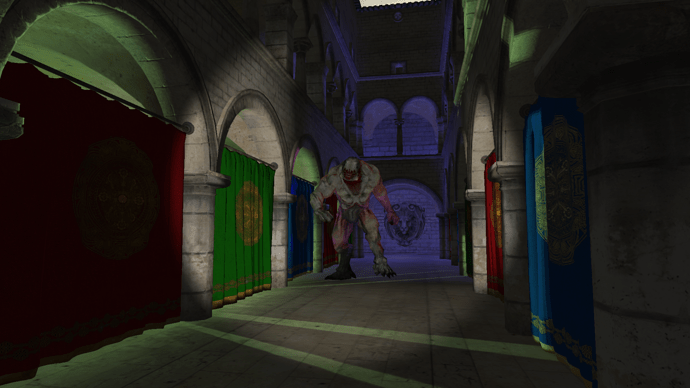 @Kwyrky Is that an affirmative?

This is a screenshot from the XNA project. At the moment I’m working on implementing a linear depth buffer in my deferred renderering framework and the project is not in a working state at the moment. I hope to find some time to work on it the next days. Also I’m not building MonoGame from source. If it is not that difficult, I could try to do so and test if I can get the Hellknight rendered in MonoGame. But this may take a while, since I have very limited time at the moment…

Also I’m not building MonoGame from source. If it is not that difficult, I could try to do so

Checking out a MG PR guide

Note: You can install the build for a PR like you would install MG regularly by finding the installer in the TeamCity artifacts, downloading it and running it. If you want to keep your installation at a specific version or if you intend to make changes, you should build from source.

Add the remote of the owner of the PR you want to try (I always use some short form of the users name for the remote name, jjagg in this case). You can see the name of the remote and the branch of a PR on GitHub at the top. For this one it says: “Jjagg wants to merge 25 commits into MonoGame:develop from Jjagg:mesh-builder”

Git may say that a submodule commit changed (not the case here). If that happens run git submodule update to checkout the right commit for the submodules.

I saw that @KonajuGames merged your changes to the develop branch. So I pulled the latest version of MonoGame. What do I have to do now?

Meshbuilder will be available in the Content Pipeline assembly, so you need to reference that.

Do I have to run

You only have to do --init once. Then you should do git submodule update if git status says your submodules are dirty