How to use FullMapRenderer in project?

I’m trying to use the class FullMapRenderer, but when I reference it in my code, I get an error stating that the type or namespace could not be found:

So, I assume it’s in different namespace other than MonoGame.Extended.Maps.Tiled (I don’t see it in the object browser) 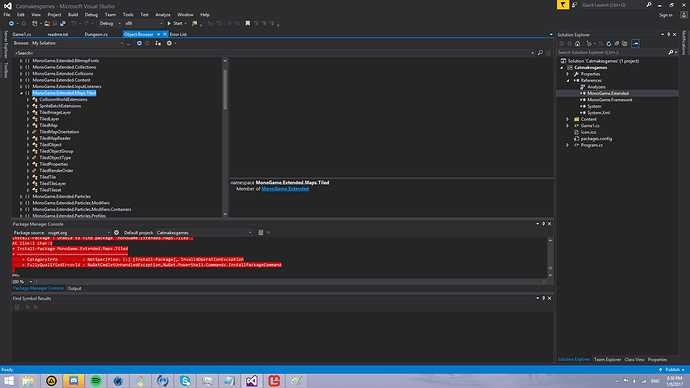 So, what namespace do I have to include in order to use FullMapRenderer? Is there another assembly I need to pull in? 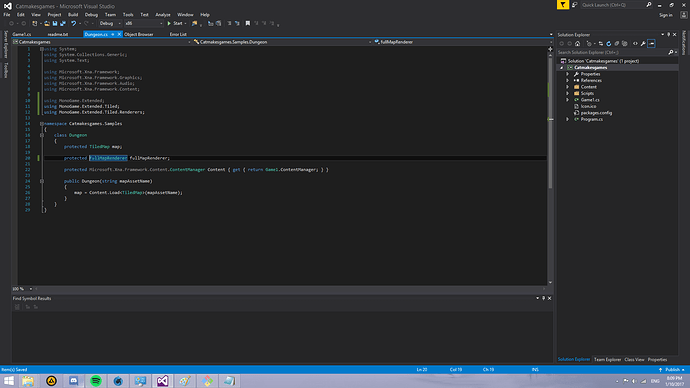 Thanks to everyone who helped with this!

@Sopheria Glad it is working for you now. Also while documentation is lacking, the best place to learn how things work with MG.Ex right now is through the demos. There is a Tiled demo which shows exactly how to load and render a Tiled map in game.

Now there’s another problem. (To preface, I looked through the demo code to see what was wrong, but it seems like it has more to do with the MonoGame.Extended.Content.Pipeline.dll binary that I’m using in my project, though I could be wrong on that).

The exception is coming from within the Content.Load method, so my thought was that the TiledMapReader is still using the old namespace, MonoGame.Extended.Maps.Tiled (but again, I could be completely wrong, these were just my thoughts as I tried to figure this out on my own). Anyone know why it’s throwing this exception?

The namespace MonoGame.Extended.Maps.Tiled no longer exists in the head branch. Do you have a mismatch of libraries?

These need to be the same version.

Thanks! I ended up just imported those packages from the repository directly (from my file system), instead of loading them with NuGet. When I tried to install that version with NuGet, I got errors saying version 1.0.0.0 wasn’t found.

But it worked when I imported them from the file system, and I’m now able to render the map as expected.