I tried implementing this old tutorial but I keep getting an error from GLControl stating that the current platform (Windows 10) isn’t supported. I’m trying to build a map editor. Is there a fix for this? Is there another alternative out there? I’m sorry to beat this topic to death as I see it’s been discussed quite a bit over the years.

Hi !
You could use “any” gui library: emtpy keys, etc.
It should be ok for a “windows” like editor ala ue4 or unity

And Monogame will integrate with these?

There’s an issue on the GitHub page for simplifying the process of embedding MG like this. It’s easy for a DX project, but there is some stuff rhat needs to be done for OpenGL platforms.

How would I go about doing it on a DX project? The solutions by ArchaicOokami are just gone. Is there a DX class similar to OpenTK’s GLControl class that GraphicsDeviceControl can inherit from?

http://xbox.create.msdn.com/en-US/education/catalog/sample/winforms_series_1
This tutorial should work. IIRC the only thing you need to change is a GraphicsDevice.Reset function call. You can just change this to the overload that MG does implement. There is a PR up to implement the overload used in the sample, but this will do the trick for now.

Once we refactor the OpenGL side so it works with this too, we can look at making it easier to embed MonoGame like this

Thanks! I’ll give it a try and report back if I run into more issues.

Alright, hit a couple of roadblocks.

Is it possible that I’m not using the DirectX version of Monogame? Is that even a thing? Here’s the error output:

There was no overload for GraphicsDevice.Present() that took arguments so I removed those.

Oh, right. That should be fine like that.
For the Reset call without params you can probably pass in the current PresentationParameters of the graphicsdevice instead of using Present.

Is it possible that I’m not using the DirectX version of Monogame? Is that even a thing

I got it working. Steps taken: 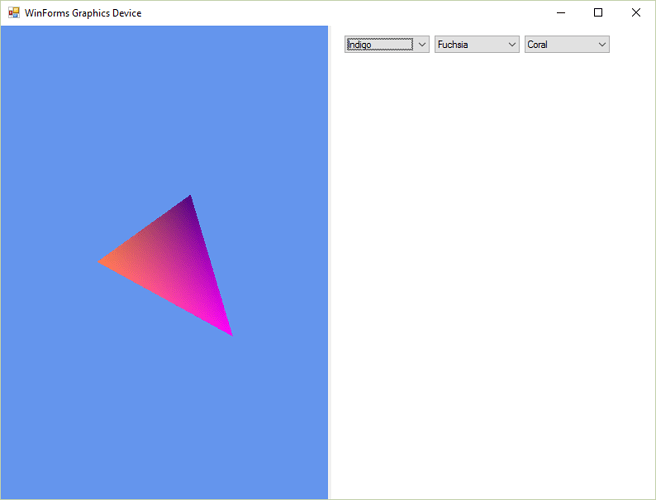 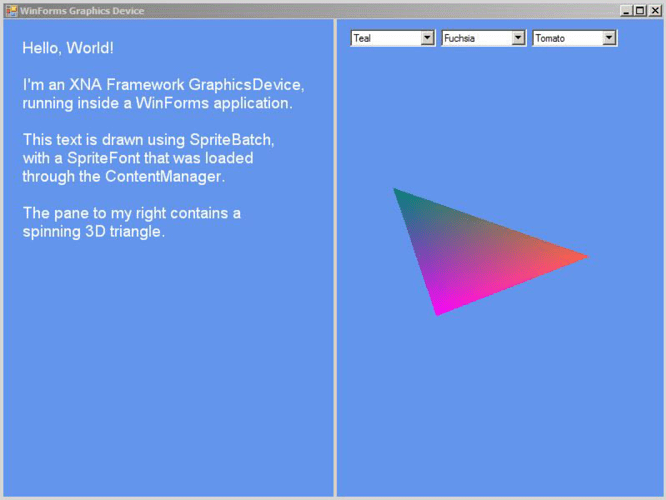 But that’s currently failing because of the present overload I suppose. I have this on my TODO list

Alright, so I tried opening the project in VS and got the error “The imported project “C:\Program Files (x86)\MSBuild\Microsoft\XNA Game Studio\Microsoft.Xna.GameStudio.targets” was not found. Confirm that the path in the declaration is correct, and that the file exists on disk”. I don’t have XNA Game Studio installed so this was expected. Do I just remove that line in the .csproj?

Alright, I couldn’t get the original project to build, so I started a new windows forms project and copied all the files from the old project in. I’m still getting the same FileNotFound Exception though this time it’s triggered by the line this.spinningTriangleControl = new WinFormsGraphicsDevice.SpinningTriangleControl();. I think I may just consider building a map editor directly in Monogame, or try and find some other solution. I really appreciate all the help.

I have an interest in this for stuff like map-making and customization too, so it would be nice if you post any findings

The lack of the other Present overload also break resizing of WinForms controls.

And https://github.com/ArchaicOokami (the only working winforms control example which seemed to work, and I’ve searched a lot) seems to have disappeared

@KakCAT If you are looking for MonoGame render controls, which are placeable inside WindowsForms, you could try out my MonoGame.Forms project.

wow, I can’t believe I missed this one. The first time I saw it I thought it was a ui system for monogame and I just discarded it.

I’ll definitively be using this for new developments, I don’t know if I dare to use them for the already made tools though.