I’ve just released a project I stopped hacking on a few months ago.
It’s pretty early stages, probably I would call it pre-(pre-alpha)

I’ve only tried it on Windows 10 and from only a few sessions with it, it does seem to be somewhat stable.

The project is a “Live” wallpaper desktop-app using monogame as it’s backend.
Modules are written as scripts/plugins and put in the “/layers” directory to make it extensible.
Modules are in control of their whole scene and executed in the default appdomain with no restrictions. And given a graphicsdevice reference they can do whatever they want to with.
Is this secure? [bleep] no.
An activated module I generally refer to as a layer as it acts as such.
Each layer having independent options of other layers.

But anyway, here’s a link to it if anybody’s interested.
https://github.com/icecream-burglar/livewall 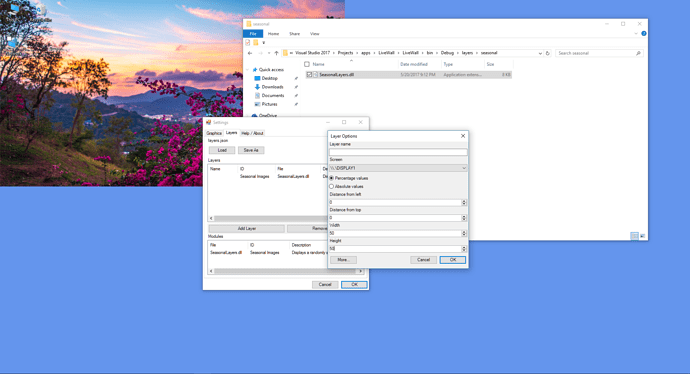 Currently, the only module I have finished is one that simply takes the current season (for my location at least) (Ie, right now it’s Spring) and grabs a random image from a google search to display.

Can you show some snapshot of this ?

Original post updated to include a screenshot AND a video

.
Although the video recorded in low-quality. Sorry about that.