Monogame I installed 3.4 version, but I’m having such a mistake. I use the version of Visual Studio 2015, Monogame windows opening screen projector in a nice way.
UAP Project for Windows 10 Waiting for your help, thank you 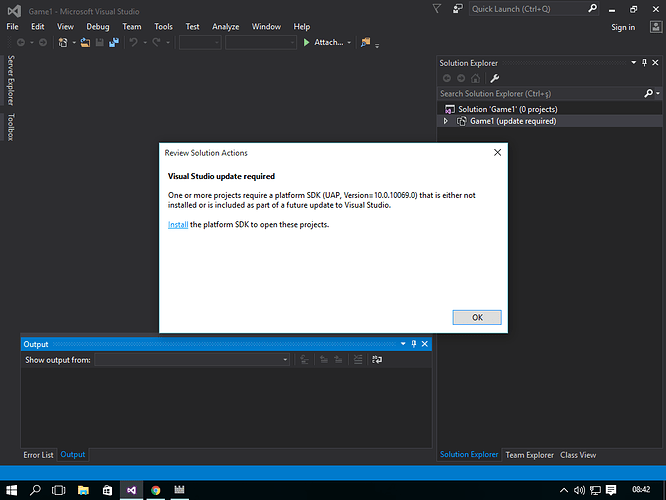 A reference for the support of projects created in current and earlier versions of Visual Studio.

The issue is an outdated project template. MG 3.4 was released before Windows 10 was released, so the template targets a prerelease version of Windows.

You can do one of two things to solve this:

Thank you also for your problem is not answered

I raised the problem is not Visual Studio 2015 version completely and then sdksetup.exe emulatorsetup.exe AIM worm manually updated version of a problem?

So these two sdksetup.exe and 10 emulator.exe wp-date versions. Written in two files that I downloaded,
Windows 10 RTM and Microsoft Emulator for Windows 10 mobile
Install the SDK, Install Emulator download from the position which I have written.

Any platform. Your languages. Your tools.

And I downloaded the file and also

Any platform. Your languages. Your tools.

Therefore, the solution is to manually edit the csproj that was created from the template. Or, make a blank app and add the MonoGame references.

Sorry for the confusion, i removed my earlier reply, since it was wrong.

No problem. Can you help via TeamViewer? I’m using the new monogame project, unfortunately I do not have detailed information on the mobile.