What more is there to say? Check it out!

thanks for releasing the demo, I hope it boosts your KS to reach the goal.

I’ve played for a bit, here are some impressions.

The game started out with showing the input keys, however, I use a German keyboard, so my “Z” key is not very close to the others. I therefore decided to plugin a controller and it worked right away (no need for restart) which is nice.

The game then took very few seconds to generate the world each time i died, I think the wait time is a-ok.

The game itself has a cool look, I think it’s very coherent and the impact and sound of different actions is great. 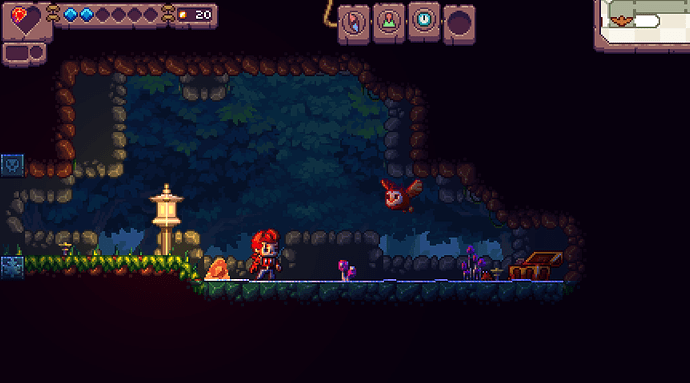 It’s interesting to see dynamic lighting on the characters (did you implement that yourself or did you use stuff like Sprite Lamp? (http://www.snakehillgames.com/spritelamp/)) But I think the effect is a bit too exaggerated, for example in the picture above my character looks almost like a mural made out of stone. I think the gradients on the character’s face should be a bit softer, but that’s “whatever”.

The game itself was fun because discovering chests etc. all the time was motivating, but the combat felt really uninteresting so far (and I’ve played around 20 minutes). I think making easy enemies is ok, but they genuinely only were a thread when the world was built in an unfair way (for example a drop down to a chest with a plant on top of it). After the first few guys I would have expected some more challenging encounters already, but the birds fell flat in that regard.

The UI is really cool, the map in the top right etc. is really well done.

So yeah, for my taste stuff like Rogue Legacy or demon peaks (also made on monogame, https://demonpeak.itch.io/demonpeak) is much more interesting, even though they are not necessarily comparable since they are mostly melee.

Thanks for the review, @kosmonautgames

I didn’t think of foreign keyboards. The keys will be configurable in the future.

Normally, the lights spawn evenly across the screen. In that screenshot, the lamp couldn’t spawn in the water, so it is dark in the corner. I’ll add more ambient light in those situations so it doesn’t look awful. The normal maps are generated with Sprite Dlight. I assume it’s a similar tool to Spritelamp, auto normal generation.

I kept the enemies intentionally simple in this demo, but you get a taste of “AI” enemies at the end with the purple skull monster. I’ll ensure there is challenge later in the game! I’ll also look into the camera naturally scrolling towards nearby enemies so you don’t bump into them by accident.

I don’t think it will ever be as fast paced as Rogue Legacy. It’s more designed to be a game where you quickly plan the best actions to take in a room and then carry out a cool combo. That’s what I’m going for

I’ve been keeping an eye on this recently (I love seeing games like this built in Monogame) so I’ll have to check the demo out once I get a spare hour or two. Once I do I’ll have more to comment on, but until then I just wanted to say I really dig the style of what you’re making here.

I didn’t think of foreign keyboards. The keys will be configurable in the future.

Played for approximately half an hour. Couldn’t select another feather, maybe I only had one? I think the game is fun

Due to the tech-demo nature of the alpha, it skimps on the tutorial. You collect blue gems by performing combos on enemies, the blue gems are spent on attacks from the magic feathers. You’ll also get gems from the large statues.

how do you do combos?

By hitting monsters in quick succession. There’s a combo timer and counter on the top left and also a sound effect when making a combo.

I got about 2:30 on the speedrun this morning, maybe we can make it a little challenge with the community here to get the best time