You could do that with fewer loops, put them under the same

Infact,you could also put the nested for loops in the same

Loop too, as well as then only set the effect params once too, that should save you a few cycles…

Or am I reading the code wrong??

Ignore that, you can’t do that, re reading your code, that’s not possible.

I think you need to restructure your data model so that it would make this possible, maybe put a flag in the PartDrawingData class so you can differentiate between the two, you can then store them in one list, or combine them into one, like this:-

In my game, I have a a collection of objects with X and Y coordinates already figured out. I only have to loop through that collection and I can say if X and Y are in the visible range draw them, otherwise skip them.

It also looks like you’re setting values every loop that probably only need to be set when they change (like if the mouse is over the tile). Keep track of the previous tile you were over and when the mouse changes position find the tile and update it.

I like that idea but I’d still have to iterate the list twice, because the cliff pieces can’t be drawn until all the base pieces are drawn (or else you get funky effects where the tile’s texture is drawn over cliff pieces sometimes). It’s because of the tile blending - when there’s a cliff edge, I have to draw the base texture for both the top and bottom of the cliff first, and then draw the cliff edge over it for the correct drawing order. So basically I’m drawing all the base textures in the row first, then all the cliffs, and theoretically then any tile deco in the future.

Yeah, I wish I could do that but since the world is much bigger than the screen I’m basically only drawing a segment of it at any given time by comparing the player position to the values I determined for how many tiles can fit on their screen, etc. So in a way I’m kind of doing the same thing. But you reminded me of something correct, which is that the tileData retrieved from the world only needs to be updated when the player actually changes tiles, not every frame, so that will definitely help. The draw data still has to be updated every frame but not the tileData. Thanks

That’s a alternative if the map is static enough you could just render the parts of the fully drawn static map to textures and scroll thru them that would be really fast. You could probably also instance it dunno if that would really be better. But i suppose a mixed approach that was really refined would be the best for a particular situation were you knew exactly what was needed. I do think in any case that this is a solid starting point to refine things further from. Since this is up i mig…

OK, I see, can you not render the depth of those sprites above the ones underneeth? Trying to think of ways you can do it without re designing your data model, but I think you will have to, because it’s not going to perform well like that.

How do you mean? Are you talking about the depth parameter that gets passed with the Draw? If so I don’t know much about using that, I tried in the past once and it came out all glitchy so I shyed away.

Edit: But if it’s time for me to learn how it works then it’s time

OK, well, working in 2D is the same as 3D, so you still have depth. you can still apply depth to textures, draw order is still important due to alpha blending though I guess.

I think the glitches you may be seeing are either due to bad draw call order with the alpha blend, or z fighting. Probably the former as you are alpha blending.

I think you need to re think your data model, it the very least, instead of itterating throuhg ALL the tiles in the row again, just get the ones you need to render.

If it was me, and, naturally I don’t know ultimatley whay you are rendering, I would do it all in a pixel shader, have one texture passed to indicate what’s to be rendered at each “tile” pass it either a set of texture atlas or texture arrays and have the shader do it all in one draw call to a massive quad.

Sorry I could not help

Target Platform: Windows only for now (possibly android in the future)

If I’m understanding what you’re saying right, I think that’s what I’m doing now. I wrote a shader to which I’m passing in those variables, and the shader allows me to blend textures together, but there’s really only one texture2D being used for all the tiles (it’s big and divided up into tiles as normal).

Is that what you are saying? I’m probably not as advanced as you.

Also, some of the comments above made me wonder: would it be faster to draw all the tile stuff to a different renderTarget and make a texture2D of it and just reuse that texture until the player changes tiles again? (And then not forget to dispose of it :p)

I’ll post you a screenshot later on today so you can get an idea of what’s going on; I’m working out some visual bugs atm since I completely rewrote the drawing code the other day.

I’m also going to look into using that depth stuff you speak of because that sounds like it could easily and totally allow me to get rid of that second loop.

By the look of your code, you are making a draw call per tile, that’s not what I am saying, say you had a map 1024x1024, that would be a lot of draw calles to draw each tile. So would be better to send a 1024x1024 “map” of the tiles values to the shader each pixel being 0-1, a pixel of 0 will get the shader to render texture 0 from the atlas or texture array, a value of .5, will render the midle texture in the array/atlas and so on.

The tile map would also be fully dynamic at runtime to, just alter the map, and the shader does the rest, this could be layered too for water, snow and other weather effects.

Not sure it would work too well on Android though…

That’s an over simplification as I would take the width of the object into account as well.

I also have Multiple layers that I support by having objects in different collections.

Ok, thanks for the help and ideas! I don’t really know much about the atlas but I will look into it. That’ll be my goal for tonight, lol.

I’m still working on cleaning my math up a little (I wrote it when I was super tired) but here’s a shot of the game in its current state (I am currently not drawing the drop cliffs so I can make sure the stuff behind raised areas is looking good. 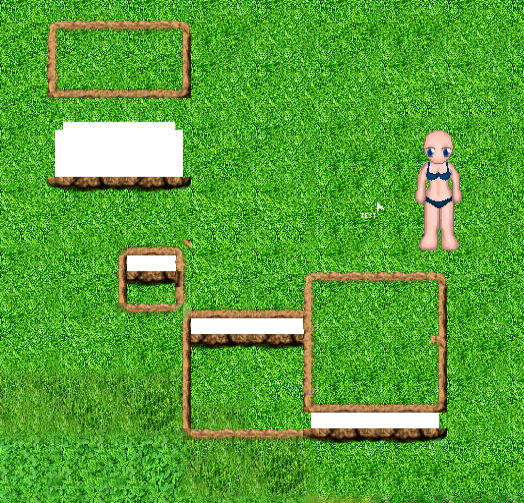 You can see a few cliff bugs here, and that’s what I’m currently working on fixing up.

Yep that’s what I’m doing too

I really like the idea of only having one draw call like the other respondent said, definitely looking into that.

Just as an aside to all the good advice here. It can be hard to improve performance if you don’t measure what parts of the code are slow. Use Stopwatch to time the different sections of your code and figure out which parts are actually slow, then focus on making that faster.

Do these 7-parts of every tile really all need to be dynamic? I’ve seen games that allocate a render target for all the background stuff and never have to render it again.