I have just started Monogame development, though I have years of experience in XNA , and so far so good.

I have a couple of issues, the main one is that when you run in windowed mode on Windows 10, the window displayed is scaled by the desktop scale setting.

I use a 4K monitor for coding and have to scale the desktop by 1.75 to be able to read anything.

Other than that it is going well. I ported my signed distance field font renderer to Monogame in about 10 minutes.
Ported my scene management system and scene transition system in another 10 minutes.

Really nice to use my old code base again.

I use a 4K monitor for coding and have to scale the desktop by 1.75 to be able to read anything

You are talking about the windows DPI scaling, right?

Please open the “app.manifest” file in your project root and search for this:

Change the ‘dpiAware’ setting to ‘false’ and you are good to go.

Is there a more final way to make that change? The only .manifest file I can find is in my game’s output folder where it compiles to. It also doesn’t have that section in it, but I’ll try adding it and see if it makes any difference next time I’m using my laptop (which has this same scaling problem).

When you create a fresh MonoGame 3.6 project by with one of the original templates, then the “app.manifest” file is automatically a part of your project (root). 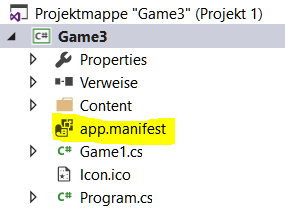 When you use an older version of MonoGame or upgraded from an older one, then you can easily add the manifest file by yourself.

Just add a new file to your project, call it “app.manifest” and add the following to it:

(This is what the original file contains)

After that you need to open the Properties of your project and select the new manifest file:

Thanks for the explanation! I probably won’t bother disabling it, then. It’s a tough problem though. I was noticing on my laptop that the resolutions that were retrieved from the GraphicsAdapter weren’t the computer’s resolutions, but the scaled ones, and the game was zoomed in. It’s worth some tinkering later, probably.

Thanks, that sorted it nicely.