I’m currently working on a tilemapeditor using monogame and winforms. I got monogame using together with winforms by using the xna winforms sample graphicsdevicecontrol etc and ported it to monogame using opentk. This far it workes fine, however, when I try to draw something I only get a black window in the form. For example I tried to clear the graphicsdevice with a blue color but I get a black window in the winforms form.

The code I have:

I’m going to call a drawfunction in the map class later, the texture t here is just a test. I follow this tutorial to port the xna sample to monogame.

Do anyone know what I should do?

The red X on a white background is what happens when Windows GDI runs out of resources.

Okay. Do you know why I only get a black window inside my form?

Hello. I have posted 2 libraries.

This is based on the Xna tutorial DIRECTLY PORTED to monogame.
https://github.com/ArchaicOokami/MonoGame.Framework.Control

This one is based on a modification to the above version.
https://github.com/ArchaicOokami/Microsoft.Xna.Framework.Control

In the Microsoft Xna Framework Control - based on the xna forms control example - You have to have 3 classes.

When using this you will create a new class, inherit GraphicsDeviceControl(Which in turn is making a UserControl) and modify the draw function to perform your task. After having this ready and throwing it on a form, which requires a whole new control per window(even if they only slightly differ) as well as to call somewhere in the code to draw. This can be done by adding the draw code to Application.Idle, or by manually calling the draw within a main loop.

The current compiled edition in my git post is targetting .net 4.0 and uses MonoGame 3.4.

While using my modified library, MonoGame Framework Control all you need to do is put a GraphicsDeviceControl onto your form. Then add the Draw event from visual designer and add you code there. The clearcolor is done automatically before draw is called and can be set via code or visual designer as it is a property you can modify from the Properties window. In order to make this one draw all you have to do is set AutoDraw to true from the visual designer or set it to false and manually call the draw inside of a loop.

The current compiled edition in my git post is targetting .net 4.5 and uses MonoGame 3.5.

PS: To anyone wondering why my random post, the person asking the question requested i post this here.

Hey Damien, I’ve had a few goes at getting your control to work for me, but unfortunately as I have virtually no Winforms experience, i’m getting stuck.

Any chance you could pop a super basic example up onto your GitHub?

I’ve got VS2015 Community, I’ve tried creating a new winforms application, getting OpenTK.GLControl and your MonoGame.Framework.Control from NuGet, but I’m unable to select a GraphicsDeviceControl from the toolbox to add to the form layout.

My goal is to try and update/replicate Gleed2D which I’ve used as a level editor in the past.

Any help (or a basic example) would be greatly appreciated!

Really lost as to what I might be missing?

In that case, I don’t know what the problem is.

That’s a shame, thanks for the suggestions

I tried that a few ways as well (both with the Monogame.Framework and the Microsoft.Xna.Framework version of the Control) and can’t seem to get any work

A simple example would be REALLY appreciated! I’m stumped as to what i’m doing wrong!?!?

@marksarcade Okay, here’s an example on how I got it working: https://github.com/TS1997/MonogameInWinforms
Editor.cs is my control class. Let me know if you need more help

Thanks @TS1997, that works. I was trying to use the NuGet package which I thought was the way to go, I guess I should have just tried downloading the code and creating the control myself!

The links provided by @Damien_James_Gibson are dead,
and the solution proposed by @TS1997 only Draws when Winforms decides to Invalidate the Control.

I would need a solution that refresh the control at 30FPS or so.

Monogame + Winform seems kinda tricky, couldn’t find anything reliable…
Thanks for the help

Here is what I use in a WPF project. Same thing basically, I use a WinFormsHost for the rendering control.

And the Tick() method is a Game loop

Of course you have to rewrite some bits to fit to your project structure.
With the above I am getting smooth frames on multiple windows. 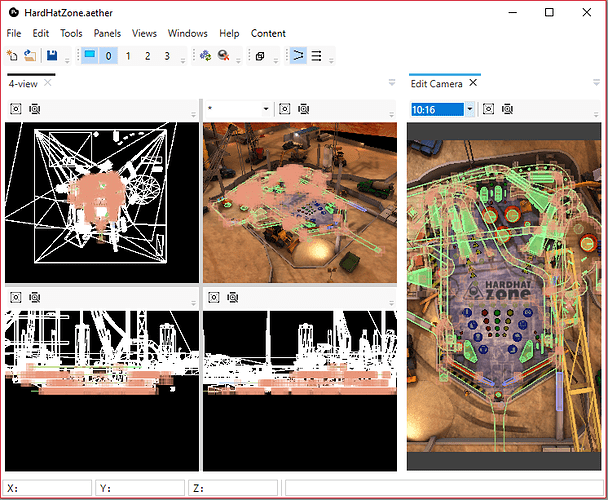 No, it’s been developed over the past years, but it still needs some work.

That’s exactly the approach I’m working on right now.
This piece of code is going to be very useful, Thanks a lot.
I’ll publish the Winform version very soon.