I am a Windows noob and am in the process of trying to port my iOS/Android MonoGame project to Windows Phone. So far the process has been extremely painful.

Anyway, after much weeping and gnashing of teeth I finally have my project compiling in Visual Studio 2013 and sort-of-running on the phone (in as much as I can see the game is launching and correct stuff getting executed).

Next hurdle is that I’m getting System.NotImplementedException when trying to load a PNG file. Should I be able to load ‘raw’ content files on Windows Phone or do I have to repackage as XNB? (I really hope not)!

Also, what types of content are supported? I really need 8 and 24-bit PNG, wav and MP3.

I am currently using v3.2 of MonoGame. I have managed to get the code from the Develop branch compiled but as yet untested as I can get the 8.0 project to load in VS2013 and the 8.1 package has required to me update my game project to 8.1 in order to reference it which now means it won’t run on my 8.0 phone!

Any help much appreciated.

OK, so updated phone to 8.1. Used latest code from develop. Still getting the error when trying to do something as simple as load a png.

Thought I’d look into content pipeline. Installed XNA. Attempted to create a new ‘MonoGame Content’ project in VS and I get ‘This version of Visual Studio only supports Windows Store Apps’. I’m using VS Express 2013 - I think I installed the ‘Windows’ version.

Pretty much at a loss as what to do now though happy to be told it’s all a problem between chair and keyboard!

You do have to package them as .xnb.

As to the content pipeline, I had the same problem. I think its from using the express version of visual studio. But I didn’t dig too hard into it as I have limited time to play around with this.

I found this free/quick tool instead to generate the .xnb files and then I just copy them into my project.

I’ve used it with pngs, font, wav and mp3 so far with no problems.

Thanks for the reply. Sounds like exactly what I need but I can’t get it to work.

Open the solution in VS and I get the same ‘This version of Visual Studio only supports Windows Store Apps’ error. Click on the executable in the ‘bin’ folder and nothing happens.

I’m going to try and install the Desktop version of Visual Studio - apparently this can run side-by-side with the Windows one.

Downloaded VS Desktop - with this I can compile and run that little xnb compiler app, however I can’t figure out a way for it to ‘add’ multiple files at once. Is this possible? I have hundreds of assets so adding them one at a time is not possible.

I also tried creating a new ‘MonoGame Content’ project in VS for Desktop. No joy. This template seems worse than useless. I have attached the errors I get. 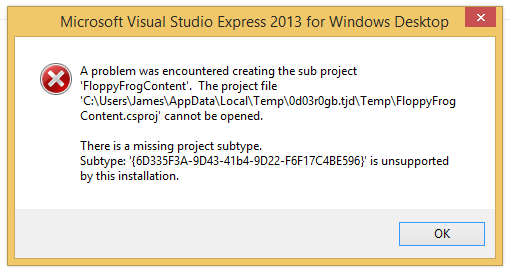 And my monologue continues…

I have edited the source to that little XNA compiler app so it can now add entire directories of files - this way I have been able to successfully process all my image content to xnb - hooray! Thank you very much for pointing me in the direction of that app.

Next issue is that when I try and process audio with that app I get an error like it’s looking for some kind of XNA package that it can’t reference. Any idea how I install this package? I did run an XNA install as described on this page.

As usual, any pointers are much appreciated - I am almost there now! 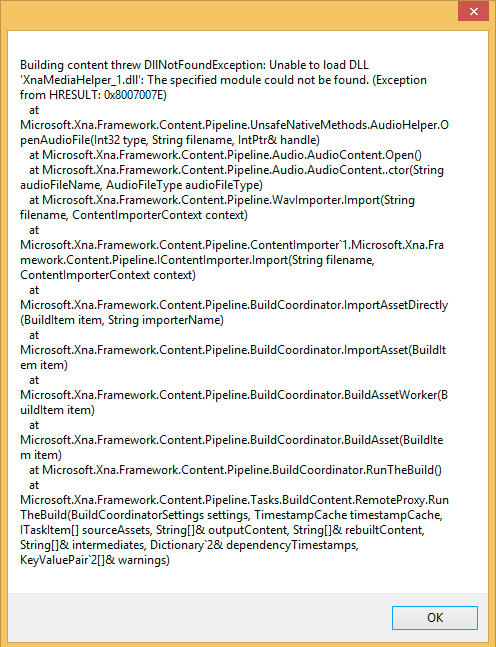 Download and install of Windows Media Player sorted it!

Apart from it didn’t - quite!

The tool now converts audio to xnb without any errors but the mp3 files created are 1kb in size which is probably why they’re not playing correctly!

Anyone have any suggestions by any chance…?