Shaders post processing, 2D 3D, doesn’t matter. Is there anything you guys need and would like to be able to just use without having to trouble yourselves with that?

Or some of the styles here, Okami should be fun to try…

This section lists some seminal uses of NPR techniques in films and software. See cel-shaded animation for a list of uses of toon-shading in games and movies.

1.GPU Rendering Magazine, online CGI magazine about advantages of GPU rendering | 2.SIGGRAPH The ACMs special interest group in graphics — the largest academic and professional association and conference. | 3.https://web.archive.org/web/20040923075327/http://www.cs.brown.edu/~tor/ List of links to (recent, as of 2004) siggraph papers (and some others) on the web.

Shading refers to the depiction of depth perception in 3D models (within the field of 3D computer graphics) or illustrations (in visual art) by varying the level of darkness. Shading is used traditionally in drawing for depicting a range of darkness by applying media more densely or with a darker shade for darker areas, and less densely or with a lighter shade for lighter areas. Light patterns, such as objects having light and shaded areas, help when creating the illusion of depth on paper. Th...

This is interesting… Rendered image of a box. This image has no shading on its faces, but uses edge lines to separate the faces.

OK I best leave the ideas there, plenty to pick from…

From me, it is between the Cel-Shading and PSOne Era style model effects or pixilation… or a shader that removes any smoothing and gives that PSOne era 3D model look… think Xenogears or Legend Of Legaia…

i was looking for effects that people actually need lol.

motion blur is interesting but has to be integrated into an engine at a very deep level, so it’s not a good fit for a plug-and-play library/sample. Same goes with HDR.

maybe I can add motion blur to the model viewer. I wanted to open source that anyways.

Voxel cone tracing is not a good algorithm in my opinion, but it’s not achievable without compute shader anyways, the voxelization needs to be done on GPU.

Stuff like automatic outlines for 2d objects etc. is probably something that more people need.

Stuff like automatic outlines for 2d objects etc. is probably something that more people need.

Especially for when objects/enemies/units are behind other objects!

another vote for some cell shading examples, something in the line of Eternal Sonata or the new Tales Of ^^

Something I would not need myself but should be very useful to others: Rendering a SkyBox

You could include the Galaxy SkyBoxes for a demo

Apart from that, I see that it would be a bit to much, to make up something for my suggested effects. Did not thought very much about it, when posting the suggestions. These are just topics that I find interesting…

I agree on outlines for 2D characters. That should be very useful.

I remeber there was a sample from microsoft for XNA for Non photorealistic rendering. Found it, maybe interesting as a reference: http://xbox.create.msdn.com/en-US/education/catalog/sample/nonrealistic_rendering

Are you wanting pixelation or a phosphor scanline visual effect to emulate old CRT screens?

Something I would not need myself but should be very useful to others: Rendering a SkyBox

just draw a sphere around the camera with radius ~= farPlane. (draw it last)

Draw it from the inside - aka rasterizerstate clockwise

use the normals from the sphere for the texture position in the cubemap.

I have something simple (I hope). A shader that will worked with skinned models, but also apply AlphaTestEffect to them. I frequently have issues with transparent texture alpha masking my model (see where the jaw connects, you can see the sky through the face because of the texture’s alpha):

Voxel cone tracing is not a good algorithm in my opinion

Why is that? What do you think is a better way forward for realtime GI? Just traditional rasterization rendering and only raytrace for specific effects (reflection, refraction)?

Revoxelizing the scene is super expensive every frame, but if we are not using it for fully dynamic scenes one might as well prebake.

And if the scene is static but the lights are moving one can use solutions like geomeric’s enlighten or similar.

Voxel GI might be at a point where it’s maybe good enough to use, but I’m just not a fan of the tech itself, i hope other ways emerge. Right now it’s the best we are gonna get, but I don’t feel a particular interest in rebuilding this approach (apart from the fact that monogame doesn’t support compute shaders

I have something simple (I hope). A shader that will worked with skinned models, but also apply AlphaTestEffect to them. I frequently have issues with transparent texture alpha masking my model (see where the jaw connects, you can see the sky through the face because of the texture’s alpha):

have you tried using Cull.None for the rasterizer state?

UE4: Voxel Cone Tracing. Just currently one of the most advanced 3D engines uses it

and apparently with good results in realtime. Since the v4.12 if I remember, they use Distance Fields instead. ( http://timhobsonue4.snappages.com/distance-field-global-illumination ) They can be used to provide GI or AO. Seems a good tech.
There is also the photon technique, but it is way too slow for realtime.

Do you mean effects that can work on their own, like a grayscale effect, where there is no need to provide a DrawableComponent for ex ?

distance fields have to be precomputed, this is very expensive/non-trivial. They are not usable for realtime transformed scenes.

Overall distance fields are super interesting though, for many things.

They are at an early stage, I think we have not yet discovered all their possibilities.
I’m craving for ComputeShaders in monogame

EDIT: From an nvidia paper, 4-5ms to voxelize a dynamic mesh: http://on-demand.gputechconf.com/gtc/2012/presentations/SB134-Voxel-Cone-Tracing-Octree-Real-Time-Illumination.pdf

That does not seem too expensive. But with ComputeShaders…

Are you wanting pixelation or a phosphor scanline visual effect to emulate old CRT screens?

Just tried to find some example videos but sadly most videos these days are played either on a PS2+ with smoothing enabled or on an emulator with smoothing enabled… or the capture process is blurring the video… so I will try to capture FFVII on PC and Grandia II if it has the option of original graphics mode as well and hopefully you can identify the exact thing I am referring to, as it could be scanlines though I mean more the way 3D objects were represented with their square polygonal appearance, I just did a search for some images and it is difficult to explain but I could see that perhaps the scanlines ‘may’ be giving some effect to the visual representation… I tried to find some FF Tactics images of the 3D battle arenas too but most appeared smooth or too small for representation…

I will try to make some video later today…

This is the setup screen for FFVII 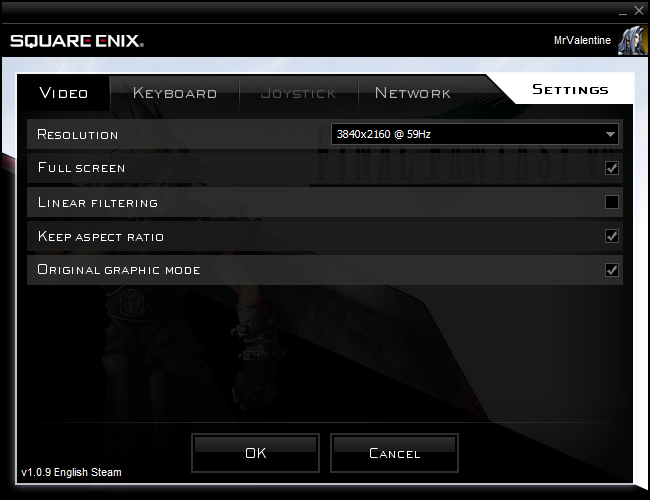 Basically if we turn off the Linear Filtering, I should get the blocky square style representation so I will make a video later today and see if I can capture the correct types of footage…