GRINDER! This guy doesn't f**k around!

Couldn’t stop myself from posting this. It might be the most epic gaming event I have done so far, so I couldn’t wait to share it

Not the most sophisticated programming I’ve done, and there MIGHT still be some texturing and or shading to be done on the sprites, but hes my most epic fight, with lots of animation and moving parts.
He has 3 different attacks: rocket barrage, auto-cannon, and the obligatory tail spike…

The fight takes place at the end of level 2, where you eventually exit a mine shaft, and happen upon a departing train… All aboard!

By the time you reach the front of the train, the engine, it has accelerated to intense speed, with this guy galloping in front…

PLEASE, Let me know if you think the tail should be a one hit kill weapon? (it can be anticipated by the wag of the tail)
Or is that just unfair in a game without guaranteed lives/continues? I could use opinions / perspectives on this.

LITTLE EDIT: Just noticed the rails were disabled after I dev-skipped ahead for the screen-grabs. Here’s what they ACTUALLY look like in game. -The wooden beams are an important factor in the whole “moving train” illusion… 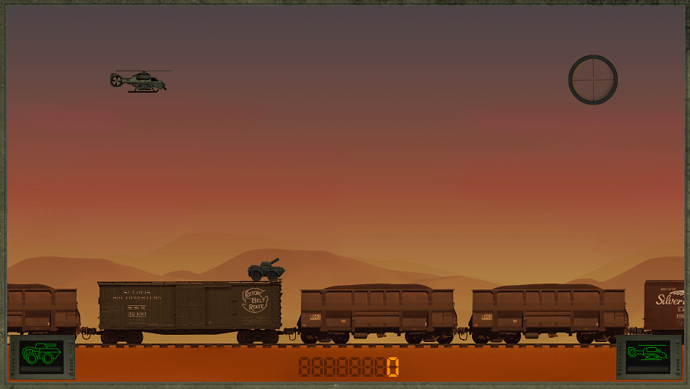 PLEASE, Let me know if you think the tail should be a one hit kill weapon? (it can be anticipated by the wag of the tail)Or is that just unfair in a game without guaranteed lives/continues? I could use opinions / perspectives on this.

It could be a critical hit of sorts and reduce the current health by 1/2?

Or just do general high damage equal to about 1/4-1/3 of health.

That DOES sound good… I could throw on some sparks and a ‘BONK’ sound!

Use this sound https://www.youtube.com/watch?v=i3UvYG8yhOk and they could die of laughter

Sorry couldn’t resist. Looks very good; the only thing that strikes me as “odd” is that you say the train is chasing the creature, so it is running in front of the train and in the same direction? Unless the creature is running backwards, shouldn’t the tail come out the back of the creature rather than the front? Not that I’m an expert on alien morphology or anything!

And yeah, you are right about the run direction. - I actually considered that. The design choice, was to have the rocket launcher head face the player, and the tail to be “off to the side”, as to not obstruct the playing field…
and my “in game” excuse is, that it has a symmetrical body, so you only need to bend the legs to a different angle, and run the engine in reverse, and THAT way, run equal speeds in either direction. TADA!

Its sort of meant to give that impression of a last-ditch attempt to stop you from reaching the strategically important “level 3”.

I am still concidering having it do a super-man style attempt to to stop the train, but I dont think I have the will power for it right now.

This looks amazing - I tried downloading it from the other thread and my chrome refused saying it was bad.

Hello, sorry for the late reply, I’ve been summering…

Thank you for the kind words! If you are still at all interested, let me know and I will create a new download for you…

I dont have a dedicated site, so I rely on these temporary but free file sharing sites…

Okay, here is the upload.

Because some people have had issues with frame rate, I am including a lite version just in case.

The lite version runs without backgrounds and clouds, but is otherwise identical to the full version.
The lite version has been confirmed to resolve frame rate issues, it will run even on a lap-top.

…Enjoy! -Any further questions or issues, just reply here. Also happy to hear any comments on the game play / difficulty…
Grinder Lite Installer
Grinder Full Installer
(Remember, if you want to switch between the two, you have to un install the previous version first)

Great thanks for this, downloaded last night just as I switched of, so will have a bash at some point over the next few days.

The 2 player coop - is that over internet - or locally on the same PC?

Just glad someone found it! .its 2 player simultaneous like the good old amiga days. So one uses mouse and arrows, the other WASD AND SPACE… The score is pooled for 2 player, and both respawn untill there are no more shared points.

Great, thanks for confirming, I’ll feed back my thoughts. Good luck on your other projects!