I want to port my Windows Phone 8 game to iOS. I download Xamarin Community for Mac and installed it. After that, I created a new solution in Xamarin. I chose the MonoGame iPhone/iPad Application template and debugged the empty application on the iPhone 6s iOS 9.2 emulator. But I always get 4 error messages: 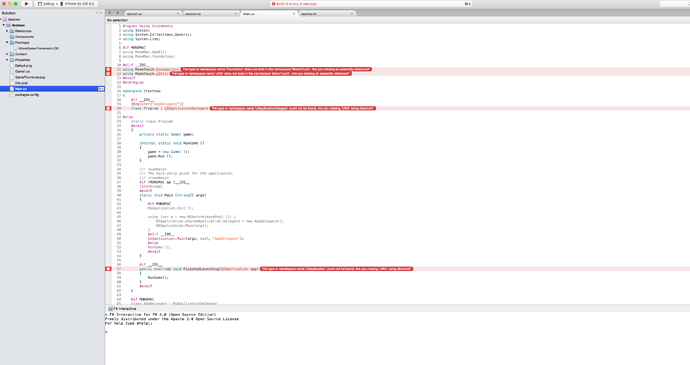 Also, what version of XCode are you running? If you’re using XCode 7, the game will crash right away, because MonoGame 3.4 initializes OpenAL, which has been removed by Apple in iOS SDK 9, or something like that. It’s been fixed in MG 3.5, but you’ll have to go to the build server and download the dll and manually add the reference. Alternatively, you can install XCode 6.4 and have it side by side with XCode 7 (which is my current setup). You can find XCode 6.4 in the Apple Developers Download Center or whatever it’s called.