The game currently contains a few orbital bodies and a small spaceship. When the space ship is moving, the movement is smooth, but I’m trying to implement a mechanic that the ship will lock into the position of a planet. 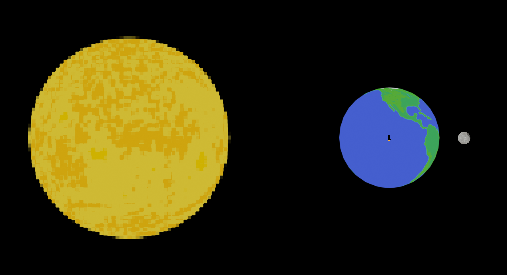 For moving the planet, I get its starting angle from the position with:

The camera I use I took from this topic.

Hello, through my Monogame adventures I have pieced together a camera for 2D games. It has code in it from all over. Not all of it is my own but I’ve lost track of the snippets that I have found to make it. As a beginner it was one of the hardest things for me to get right. And find for that matter. It handles movement,zoom and has a VisibleArea Rectangle useful for culling. Thought I would post it on here for any newcomers that are just looking for a copy paste simple camera. Hope it helps some…

I set the spriteBatch transformMatrix to the camera’s matrix.

Now I don’t know where the problem of the shaking lies. Could be with the camera, the orbital position or something else.
Any help here will be amazing!

More code or the project can be included if needed!

Thanks for the reply!

I am using a rectangle.

The code for drawing is as follows:

And the rectangle function:

I was following a tutorial by Batholith Entertainment on YouTube and not sure if this is the best way of doing it!

could also just be a sampling issue … do you use MipMapping?

If your using the monogame camera your movement will not be very smooth if your drawing using rectangles. All your vectors are rounded to int position.

Spritebatch.draw uses an overload that takes in a vector instead of a rectangle. The overload also can use a vector for scaling the x width or the height, as well as radians for rotating.

Thank you very much for the replies boot!

So the problem was in the fact that I was using the rectangle to draw the sprites as the rectangles require an int as an input so I had to round the position values! Thank you very much

If you use rotation the origin is a vector on where on the sprite the rotation will be. The method overload is as follows

Thanks again for the help!
Managed to figure out the other overloads after a while

Great! Also if your looking for some maths and ideas around gravitational pull from planets etc i highly recommend watching Dan’s teachings on the coding train. Its in Java but it’s the same idea. Theres also some other good videos regarding drag and friction in this series.

Watch “2.5 Gravitational Attraction - The Nature of Code” on YouTube