I am currently trying to perform some basic thermal analysis on a satellite. Basically, I need to calculate surface areas (view factors) as seen from the sun and earth. A common way to do so is via an orthographic projection of the surface of interest as seen from, i.e., the sun.

In this plot, you can, for example, see the solar cells (light steel blue) as visible from the sun. 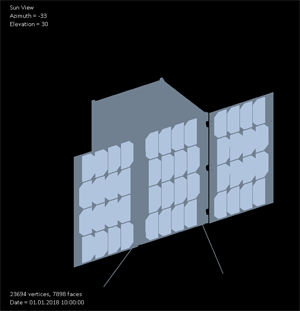 Knowing the size of a single pixel in this representation, I only need to count the pixel number to get the surface area. So far, I did this by using a RenderTarget2D and a Color[] Array which I filled via GetData<Color>() and cycled through. Works well, but is super slow.

However, I believe that this task can also be solved on the GPU. I have read about atomic counters employed to get an image histogram, which is exactly what I need. In this tutorial, an atomic counter (or InterlockedAdd) is used to correct an image for luminosity.

Preamble Recently, I have been researching some next-gen rendering techniques. There's some great presentations out there by the usual sus...

However, I have failed to make it work so far. I have checked the HLSL reference and seen that the function I probably need is only available for shader model 5 and newer (https://msdn.microsoft.com/en-us/library/windows/desktop/ff471406(v=vs.85).aspx) and have therefore changed the profile accordingly. Unfortunately, this is currently not possible with OpenGL 3.0 (needs at least 4.2, I believe), so I am using DX.

Since I am very new to shaders, my approach is probably very naive (Main routine of pixel shader, using the standard notation as predefined in the monogame SpriteEffect template):

I get two error messages during compilation:
a) groupshared is not supported in ps_5_0 -> which shader level should I use?
b) Resource being indexed cannot come from conditional expressions … -> probably using histogram the wrong way?

Does anybody have experience in how to use this command properly? Or am I missing the point entirely and should use another way to solve this problem?

Thanks a lot in advance

this doesn’t work in monogame, sorry. Compute shaders are not supported. You will have to look for a different framework

This was a quick (and unfortunate) reply. Thanks a lot though!

maybe you can do it with a pixel shader, given you only want to look for a maximum of 4 colors (not a histogram, but good enough for your purpose).

You can have a 1x1 rendertarget (Format.Single to Format.Vector4) and for that pixel you can sample all other pixels, and count how many of them have the looked for color. Divide your result by amount of total pixels.

To reconstruct the int value you can read that pixel in your C# code and multiply by amount of total pixels again.

I guess there might be an issue with the shaders if you sample thousands of texels, that might not be supported. But in theory it’s no different than reading one sample for each pixel.

But in theory it’s no different than reading one sample for each pixel.

Will it still get parallellized in this case?

actually for 1 pixel probably 4 pixels would be calculated anyways, maybe 16 even depending on gpu.

We really need to get compute implemented

If I understand it correctly, the calculation would be performed in series on the GPU instead of on the CPU. I believe in this case the CPU would do the faster job, don’t you think?

I just checked - the InterlockedAdd is in principal supported in Pixel Shaders 5.0 and above:

Performs a guaranteed atomic add of value to the dest resource variable.

Another approach would be to reduce the size of the image you are grabbing via GetData() so that it’s no longer so slow. A multi-pass solution should get you quite close.

For the first pass create a RenderTarget with dimensions 1/4 the size of the original image and SurfaceFormat Single. Have your shader sample a 4x4 block (16 samples) of original pixels and output a count of the number of matching pixels. For instance, if your original image is 1024x1024, you should then end up with a 256x256 image where each pixel has a 0…16 value.

For the second through nth passes do the same kind of thing. You will need a different shader since your input will be a count of the previous level instead of a color. Just sum the 16 sampled values and output that value.

Repeat this until you either have a 1x1 image or an image with a dimension that is no longer divisible by 4. At that point, use GetData() to get the results and sum them to get your answer. Since the image you are calling GetDtata() on will be small it should be quite quick.

Even with multiple passes this should easily run at real-time rates.

Hmm, sounds interesting and promising, but I am not sure if I understand it correctly:

Since I have more than one color I need to count at a time, I could either use a different surface format and write into the four channels (rgba) or use offsets, e.g., color 1 is counted as “1”, while color 2 is counted as “16”. Or maybe there’s a smarter way.

Update: Do I just sample around my current texture coordinate knowing the resolution of the input image?

First draw you satelite to fill the depth buffer. Then redraw each surface and count the number of drawn pixels with a query.

I was not too successful getting the shader version to run smoothly, but OcclusionQuery seems to work fine. I have to check now how performance behaves compared to the CPU-based histogram in case of many objects. Will let you know once I got something.

Good call by nkast. I had completely forgotten about OcclusionQuery.

To answer your question about the shader… When you do this kind of filtering you generally “render” two triangles to cover the whole RenderTarget. The vertices need to include UV coordinates which you can then manipulate to generate the samples you need. Typically I will render the triangles with UV coordinates going from 0…1. I will then also pass in a float2 parameter to the shader which contains the 1.0 over the source texture resolution. This value is then the offset you can use in the sampler to adjust the sample position by a single texel.

As far as dealing with multiple colors, you could do up to 4 at a time like this using the Vector4 SurfaceFormat for your rendertargets.

Thanks @scoy, I will try to implement it for comparison. For now, however, I will stick to the occlusion query since here I am free in terms of resolution.