A player of my game got a weird graphic glitch: 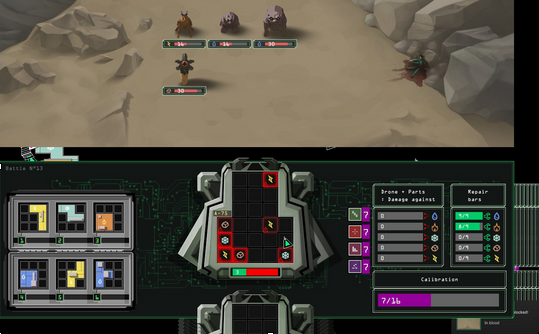 This is his bug description:

“One glitch causes the audio to cut out. And the fullscreen and windowed versions both have their own unique visual glitches. Windowed cuts off the bottom of the screen while fullscreen.
Whenever something moves between the bottom screen and top screen, it
creates weird imprints, which you can see to the far right and the left.
It’s really odd. And it happens ALWAYS. Not just sometimes.”

And the drone(ship) we saw under the first one is not a duplicate/repetition. It’s the rest of the spritesheet

Anyone have this problem? Any advices to solve this?
I use the latest version of Monogame.

The “imprints” they refer to look like what happens when you move a texture over an area that does not get cleared at the beginning of the Draw().

Right now i don’t have the screen resolution the player used.

A friend suggested to clear backbuffer and rendertarget before to draw.

Clearing the backbuffer is usually not necessary if you can guarantee you’re going to redraw the entire viewport, but that appears to be the issue here.

I think it is possible taht some of the UI is aligned to the bottom. I guess I should position everything according to corner top left?

Well, the problem came from the fact i was handling only 16:9 screen ratios by using a unique uniform scale factor instead of a scale factor for the width and another for the height.
So when a player with a 1440x900 px resolution was launching the game, things were messed up.

Good to see you found the issue.