I’m doing a 2D game and I want to split the screen in two separated areas, something like this 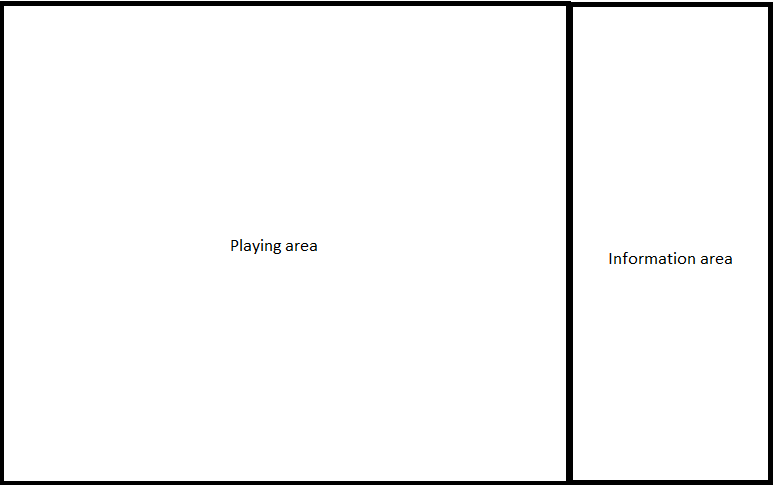 So the question is when splitting the screen what’s the technique used to draw each area?

I think there is no specific way how it should be done. You can experiment and check what works out for you. If you use rendertargets, you have the advantage that its easy to re-Scale the whole thing afterwards. The Problem is, scaling fonts this way will be pretty ugly, except you’re using 8-bit Fonts.

If you use RenderTargets with specific sizes, or you just render the Information area on top of the playing area… Everything has advantages and dis-advantages.

E.g. If you want the Information area to be toggleable, rendering it on a higher layer and overlapping the playing area would be an idea. If you don’t plan to do that, it could be called a waste of rendering effort.

If you use RenderTargets with specific sizes, or you just render the Information area on top of the playing area… Everything has advantages and dis-advantages.

Yeah, I know that everything has advantages and disadvantages that’s why I’m asking here so someone that has implemented it before can give some tips like you’re doing now

E.g. If you want the Information area to be toggleable, rendering it on a higher layer and overlapping the playing area would be an idea. If you don’t plan to do that, it could be called a waste of rendering effort.

In this game the information is not toggle-able, it will be static and visible all the time. That’s why I think I can use two different RenderTargets to avoid overlapping.

Well then just have 2 different rendertargets that don’t overlap.

You can draw rendertargets the same way you can draw any other texture with SpriteBatch, so in that case just have the appropriate destination rectangles for these two and you are good to go.

Well then just have 2 different rendertargets that don’t overlap.

Is there a way to use the same SpriteBatch.Begin() to draw in every RenderTarget?

How can I measure the time needed to call SpriteBatch.Begin()?

You can use the same SpriteBatch, but you need to begin anew every time with a different renderTarget.

The calling of SpriteBatch.Begin() and End() is very very cheap, it’s more about the stuff that happens in between.

So now you would need to

Thank you for your help.

I’ve rearranged the code using what you suggested and it works great!

You can also set the Viewport to the area you want to draw.

You can also set the Viewport to the area you want to draw.

Should I use the Viewport with RenderTargets or Viewport only?

But the same is true when drawing to a RenderTarget so would you please tell me the differences between a Viewports and RenderTargets?

Here is a very simple example. No RenderTargets are required.
https://msdn.microsoft.com/en-us/library/microsoft.xna.framework.graphics.graphicsdevice.viewport.aspx

Yes! you’re right I don’t need a RenderTarget to split the screen. Using Viewports is more efficient because I’m drawing directly into the backbuffer.

I tried using Viewports before posting here but they didn’t work because I’ve to use spriteBatch.Begin() before drawing in the Viewport.

Thank you for your suggestion

The other advantage that the Viewport approach has is that it allows you to use full screen anti-aliasing. This won’t be a problem with a sprite-based game but will make a difference if you’re doing 3d.

huh. This thread turned out pretty good! So when you draw in these viewports, each starts a new coordinate system? draw at 0,0 on all viewports is top left corner? And can you have any number of viewports?

Yes, the Viewport is a property on the graphics device so you can only ever have a single one active at any time but you can freely change it as much as you want during your drawing. And yes, they have their own coordinate system with 0,0 in the upper left corner.

The viewport transformation is just the final stage of vertex transformation in the graphics pipeline. Its task is to map the points from the normalized view volume you end up with after applying world, view and projection to their final position on screen. The normalized view volume is a cube with side length of 2 centered around the origin. So to map this to screen coordinates, you will need a transformation consisting of a scaling followed by a translation, so that everything fits inside your destination rectangle on screen. the z-coordinate holds the depth, it gets mapped from normalized coordinates (-1, 1) to (0, 1).