Hope somebody can help me there…

I set SpriteSortMode.FrontToBack and want make use of CustomEffects
How does that work together?

works fine with SpriteSortMode.Immediate, but that mess up with all my drawingorder, where i defined layerdepth,

Character can stand behind objects and in front of it.
Character is drawn in to parts with diffrent layerdepth. other objects as well.

Is there a solution, without building a whole new construct to sort it myself? (using SpriteSortMode.Immediate)

Maybe i missed something…

You can set the shader effect in the spritebatch itself, no need to apply the shaders yourself. Just set up all the parameters up front and you are good to go.

I hope i understood the question correctly 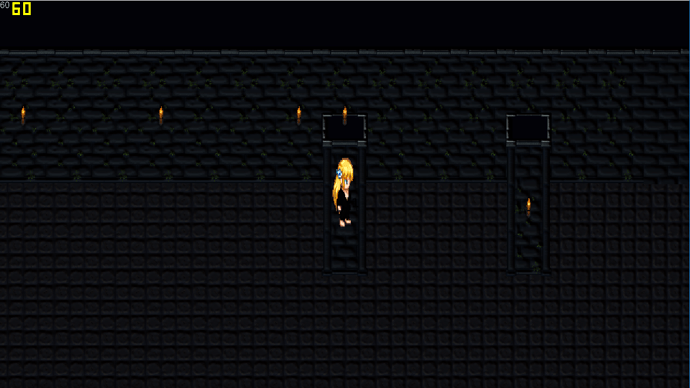 Maybe a bit visual helps.
I have multiple layers with different depth-
like 5 rendertargets foreach layer of the map,+ 1 normalRendertarget foreach of it(For lightning effect)
Character,Torches has its own depth.

My current solution, wich i come up with, was like 5 additional rendertargets,where save the result and draw it in a second step to the screen with its depth.

This works fine, but looks like a work around.

Hi !
How are you specifying a layer’s depth in the spritebatch ? It may be the problem, as i’ve already seen this kind of problem here and solved it

I use the Draw method overload with layerDepths parameter.

Like this.
And get sorted at the end with FrontToBack.

Okay, lets make more clear what happens here. Because i think what you suggest wouldnt work.

MapObjects like torches work the same way.(Statues not seen on pic are made of four parts each higher depth value)
Player can be behind and in front, just like the pillars.
I draw it all between one spriteBatch.Begin(…); and one spriteBatch.End(); with rendertarget stuff before that

Hope you got an idea what happens in my “game”.

Its my very first project that got something bigger…

My newbie way works somehow…
Cant be that wrong.

I am not sure what your idea were. A batch for each layer? but everything has its normal(layers/mapobjects/player),too.
I am confused.
Its me ,not you.

I’m sorry. I had no idea whatsoever.

I was just stating how SpriteBatch works and why you can’t put an effect ‘in between’ a single batch.

I remember a similar discussion on MonoGame.Extended a while ago…
found it.
It’s rather long. Sorry for that.

Thanks read it all. Very interesting the part with the “depth buffer” approach, seems good.
I believe, i use what they called “painters alogrithm”, what is fine for my needs i guess.

Thanks for the input, but doesnt seem to be fit.

Wow.
You really read it all

Here is a list of useful links that I made some time ago. I’m still maintaining it.
And here is another list created by @MrValentine on this board.

Contributions are welcome on both.
Maybe you find some of the stuff useful as well.
cu