How can I port my Windows Phone 8 game to iOS?

I created a very little Windows Phone 8 game with MonoGame and Visual Studio 2013. I tested the game on Windows Phone emulators and a Nokia Lumia 920. Everything worked, but I don’t know how to port my project to iOS. How can I port the game to iOS? How can I test if the game runs on iOS? Are there any iPhone emulators?

You have to be running on a Mac, I’m afraid. You can’t do this from within Visual Studio, or even in Xamarin on a PC.

if you have a Mac then you’ll need to install Xamarin on it - it should then install most of the prerequisites for you, including Xcode (as far as I recall) which is where the iOS simulators come from (the iOS simulators are much better than the Android SDK emulators, they’re actually usable for playing games on).

You won;t be able to use the same .sln file - you’ll need to set up a new iOS version of your project. You should be able to link to all the same source files, though. You can (but perhaps shouldn’t) reuse the same assets (pngs, wavs etc) - the only think you’ll have issues with is spritefonts. These need to be built specially for iOS over on Windows.

I have an iMac with OS X and I installed Xamarin Studio on it. After that, I created a new solution(C#–>iPhone–>Empty Project). But I don’t know how to proceed. What should I do next? How can I port my MonoGame Windows Phone 8 project to iOS?

You need to import all of your source files into the new empty project. Use ‘Link’ rather than ‘Add’, because Add takes copies of the original files but ‘Link’ reuses the same files so you only have one codebase.

You’ll need to add references to MonoGame.Framework.iOS and LidGren.iOS to your empty project, too.

You don’t need a separate Content project; just create a new folder in the root of your project called Content and put all of your content in there.

I downloaded MonoGame for MonoDevelop Mac and added the dlls to my project that are located in the folder iOS. In addition, I added my Game1.cs from my MonoGame Windows Phone 8 project. But nothing happens if I debug my project. In Game1.cs, I load an image and I draw it, but the iPhone emulator just draws a black screen. What is wrong? Why is the iPhone emulator always showing a black screen? 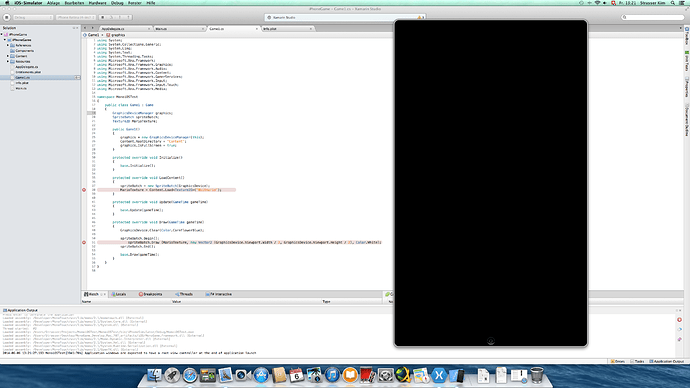 I build a new monogame addin for Xamarin Studio 3/ Monodevelop v5
for you can see this post for the link. click here